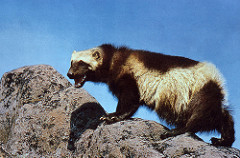 In her interview for the Mesa County Oral History Project, Lucille Mahannah, longtime superintendent of Mesa County Schools, remembers playing in bountiful grasses that covered the dobies (desert hills) around her home between Fruita and Grand Junction. Anyone looking at the sparse vegetation on our rolling adobe desert might scoff at this claim, but Emma (Nagel) Berg, who grew up north of Fruita, echoes it, saying the grasses were as “high as her head.”

While that last description may seem hyperbole from a child’s recollection, Charles “Frank” Moore, cowboy and the first Federal grazing manager for the area after the passage of the Taylor Grazing Act, confirms the history, stating that desert hills in areas such as Whitewater contained grasses “to the belly of a horse” in some places, prior to the introduction of ranching in the 1880’s. He also discusses the Civilian Conservation Corps’ widespread removal of cactus and other plants dangerous to livestock, which further decreased the desert’s diversity. 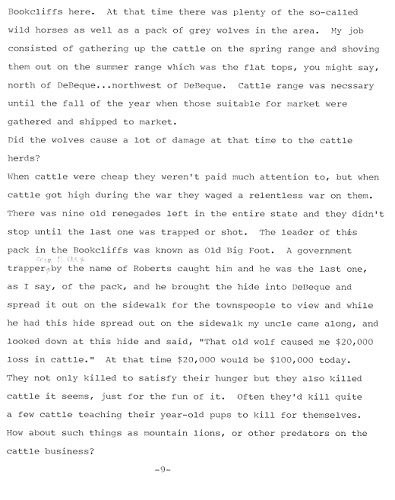 J.W. Latham talks about wolves in the Bookcliffs

Berg remembers seeing wolves that would come down from the Bookcliffs into the desert around Fruita. Wolves you say? In the early Twentieth century? Weren’t they all killed off by then? J.W. Latham, a cowboy whose father ranched in the De Beque area, recalls a wolf pack, led by the alpha male Old Bigfoot, that ran in the Bookcliffs well into the 1920’s (his oral history is not yet online, but see the page from his transcript to the left). The wolves gave ranchers fits until they were all killed by ranchers and Federal hunters. The Last Stand of the Pack, a book about the eradication of wolves by federal hunters, written by the famed conservationist Arthur Carhart, relates that Bigfoot’s pack lived primarily on the Roan Plateau, but that it ranged into the Bookcliffs and other surrounding areas.

Jeanette LeBeau recounts how sightings of wolverines in Piñon Mesa were common in the early Twentieth century, and how they “took possession” of the creek where the family stored eggs and other perishables, making it impossible for anyone to get to the water until the wolverines decided to vacate the area. Mahannah and Berg also recall seeing many badgers living in the (then) grassy hills of the Grand Valley.

You can still see some areas around the valley where a dobie has been protected from animals and development, and the growth of grasses and the desert plant variety can be startling. Residents of Mesa County continue to sight badgers, although the size of their habitat surely isn’t what it once was. Wolverines? Wolves? Who knows what animals may decide to move home.

For more information about the Mesa County Oral History Project or other online archives, visit our 970West Digital Collection.