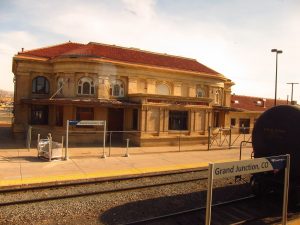 The Denver and Rio Grande Railroad (D&RG) gave Grand Junction its first permanent transportation link to the outside world with the completion, in November 1882, of a railroad bridge over the Colorado River at the confluence. The first train arrived at seven minutes of five o’clock on November 21, 1882, coming over the bridge with town founder George Crawford aboard, just hours after the bridge had been completed.

In the December 2, 1882 edition, the Grand Junction News reported that mail first arrived by train. The News kept track of the D&RG line as the connection from Denver to Salt Lake City progressed, often urging readers to imagine the town’s future greatness when linked to the outside world by train, and referring to Grand Junction as “the new metropolis on the Grand.” Metropolis?

D&RG was also important in early town government. In December 1882, the Grand Junction Town Company, predecessor to city government, altered bylaws to expand the number of town directors from three to six, with the new directors coming from the ranks of D&RG’s officers. Members were active on important issues of early settlement, such as establishing a county apart from Gunnison County and electing a representative to the state legislature. D&RG also owned half of the town site, assuring its importance to Grand Junction (and its profitability through the development of rail yards and real estate speculation).

Not all associations with railroads were so grand. In 1882, The News, a supporter of Republican candidates, accused D&RG workers and bosses of accepting bribes to vote for Democratic Party candidates.

In later days, the perhaps hyperbolically named Interurban Line transported both people and produce from Grand Junction to Fruita, with stops in Appleton and other places between. It was owned by the Grand Junction and Grand River Valley Railway Company (a mouthful of a name that helps you understand why they called the train the Interurban). Grand Junction also had its own streetcar line, which made a figure eight circuit from South Street to Grand Avenue and from 2nd Street to 12th Street (some of the rails for this line could still be seen in places in downtown Grand Junction in the late Twentieth century). In the days before automobiles were widespread, the streetcar and Interurban were well-used and important modes of transportation for people in the Grand Valley.

To learn more about the Interurban, the Denver and Rio Grande or other local railroads, visit our Mesa County Oral History Project collection, the catalog, and our Rashleigh Regional History Room in the Central Branch.