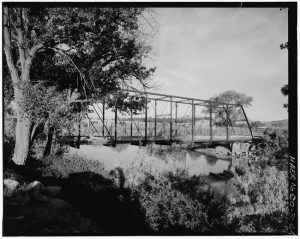 Did you know that Grand Avenue used to extend east of its current stopping point onto what was then called East Grand Avenue? According to Mesa County Oral History Project interviewee Levi Parminter Morse, before the construction of the I-70 business loop, East Grand continued over the railroad tracks and became D ½ Road at 30 Road. You can still see traces of this old portion of Grand Avenue where it dead ends in a field just east of 28 Road.

On the west end of its length, Grand Avenue once ended in the Riverside neighborhood, before the river. Now Grand Avenue continues onto a viaduct that cuts the Riverside neighborhood in half. Prior to the construction of the overpass where Grand becomes Broadway, motorists relied on the Main Street Bridge to take them over the river and into the Redlands. Both Craig Aupperle and Jean Urruty mention the Main Street Bridge in their interviews, and it seems it was built in or around 1912. Drivers of both cars and horse-drawn carriages utilized it.

Prior to 1912, anyone wanting to travel from the town of Grand Junction into the Redlands utilized the old Black Bridge, which crossed the Gunnison River from just west of 5th Street in Orchard Mesa, near the present Clymer Way. This bridge was built in 1891. It was damaged by flooding in 1983 and its use discontinued. It was eventually torn down, though not before many daredevil high school students used a rope to swing from the bridge and into the river for a swim.

Before 1891, citizens of Grand Junction wanting to get to the Mesa County Hospital, located just above the Colorado River in the Redlands near the current Broadway beginning in 1883, had to take a ferry across. Check out our Mesa County Oral History Project and other parts of our 970West Digital Collection to discover more interesting tidbits of local history, interviews with veterans and more.