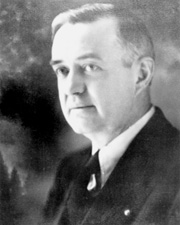 Walter Walker was a popular and influential man during early 1900’s Mesa County.  He was most famously known for his ownership of the Daily Sentinel newspaper in Grand Junction, Colorado, which he bought in 1911 and ran until his death in 1956. He was also a huge player in the political scene: a staunch Democratic, he acted as Colorado’s Democratic Party Chairman for two years and briefly served in a U.S. Senate seat as an appointee

Walter had a great deal of accomplishments under his Western Slope belt. As a friend, benefactor, and motivator for many wonderful establishments and charitable organizations in the Grand Valley, he was well-liked and admired within the community.  Community efforts are important in any town, and Walker went above and beyond to ensure this area had specific resources available to its inhabitants.  The Lincoln Park-Moyer Public Pool, Goodwill, Salvation Army, the Avalon Theater, and the Veteran’s Administration Medical Center were all heavily backed by Walker.

Although Walker may have been loved by his direct community for his many good deeds, the admiration wasn’t felt far and wide.  He had a well-known, politically-driven discord with then Denver Post editor Fred Bonfils which eventually led to the creation of a mischievous prank and a lawsuit. 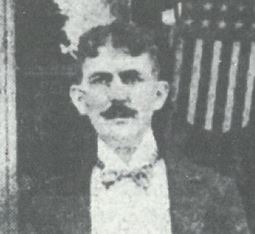 Bonfils was a man often tangled up in conflict.  He owned the Denver Post from 1895 to 1933 and was said to exercise “yellow journalism,” often times producing sensationalist stories.  Bonfils supposedly had many enemies due to his ego and exaggerated reporting which led to several violent encounters; one occurred in 1899, when he and his business partner survived getting shot in their office by Mr. W.W. Anderson, the attorney who represented the notorious Alfred Packer.

Mesa County Oral History Project interviewee and old Daily Sentinel employee Al Look describes a time in the early 1900s when Walker developed a mischievous rumor to take the wind out of the sails of the reportedly arrogant Bonfils:

“Bonfils was a fisherman or at least he thought he was.  He came back and he had caught about a 6 or 8-pound rainbow and put it on display in the Post, in the Denver Post window.  And wrote a big story about it.  So, Walter Walker wrote a piece to Time magazine telling them about this fish that Bonfils caught and that if the facts were known that was a pet fish of a certain resort up in Wyoming named Elmer.  And when they’d feed him, the fish (Elmer) would come up and they would pet the fish and feed him.  That everybody loved that fish and then here comes along Bonfils and hooked him.” – Al Look

One can imagine Bonfils wasn’t too pleased to become a rumored pet killer.

A more serious blow came years later when Walker wrote a letter to the Rocky Mountain News in August of 1932, harshly criticizing Bonfils.  The Rocky Mountain News had a vicious and ongoing feud with the Denver Post at that time, and they decided to publish the letter to further fuel the fire. According to a book titled, “Amole One More Time,” by Gene Amole, Walker’s letter to the editor lambasted Bonfils, calling him a “vulture,” “public enemy,” “slimy serpent,” and a “contemptible dog.” Walker then went on to add, “The day will come when some persecuted man will treat that rattlesnake as a rattlesnake should be treated and there will be general rejoicing.” 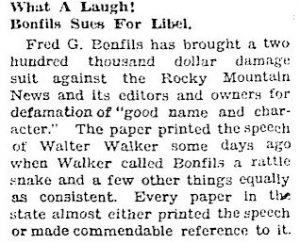 This riled up Bonfils so much that he decided to take legal action, suing the Rocky Mountain News and its editor, C.E. Lounsbury, for a whopping $200,000 in a libel action suit (that amount is equal to over $3,000,000 today). According to an article posted in the Eagle Valley Enterprise on September 2, 1932, Bonfils was suing for “defamation of good name and character.”

Bonfils never lived to receive his redemption against the sharp-tongued Walker.  Amidst the ongoing scandal, he passed away in February of 1933 from encephalitis before the suit could be taken to court.

Some of this information was compiled using Colorado Historic Newspapers, a terrific database available to you on Mesa County Libraries website with your library card. You can scour papers from all over the state dating back to the late 1800s and read obscure town gossip until your heart’s content.

For more stories from original pioneers who made the Grand Valley home, visit the Mesa County Oral History Project for a dose of the county’s intriguing past.