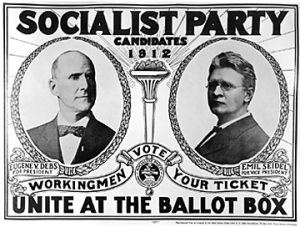 Poster from the 1912 presidential campaign of Eugene Debs (public domain)

In 1912, Eugene Debs, the union leader, fiery orator, and perennial socialist candidate for president, received over  900,000 votes during the presidential election, or 6% of the popular vote (consider that before women’s suffrage and our country’s population expansion, the number of eligible voters was far lower than today). In the aftermath of the Panic of 1893, many Americans facing economic inequality and workers lacking the protections available to them today were attracted to his message. Riding on Debs’ coattails in the years between 1900 and 1920, several members of the Socialist Party of America were elected to offices throughout the United States, including mayoral candidates. Grand Junction, Colorado elected a socialist mayor of its own: Thomas Matthew Todd.

Todd owned a large lumber company that eventually became Mesa Lumber. By all accounts, says researcher David Sundal, he was a wealthy man who owned a nice, Victorian home on Main Street. Todd was also a member of the Socialist Party of America. He ran for the office of mayor in 1909. Grand Junction then had a ranked voting system (also called preferential voting) created by James Bucklin, a lawyer with the Grand Junction Town Company and creator of the city’s charter government. In the ranked system, voters listed their first, second and third candidates for office. When the first choices were tabulated, Todd was not the clear winner, but the second and third choices of Grand Junction’s electorate elevated him to office (“Walter Walker and His Fight Against Socialism” by Jeanette Smith, Journal of the Western Slope, V. 12, N. 4, Fall 1997).

Todd’s election drew the immediate opposition of Walter Walker, editor and future owner of The Daily Sentinel (the election also made Walker an opponent of ranked voting, presumably because it created an opening for third party candidates to win elections). Walker’s role in bringing the Ku Klux Klan to Grand Junction may perhaps make his own political views questionable, but nevertheless, he held firm moral convictions about the evils of socialism.  He spearheaded a campaign to thwart Todd’s policies, and eventually led an effort to recall both Todd and socialist sheriff Shiperd B. Hutchinson (Smith, Journal of the Western Slope).

Todd arranged for the creation of a municipal woodpile that could be used by citizens who lacked sufficient fuel for the stoves they used to heat their homes. Homeless men could chop wood in return for meals and shelter. Walker attacked the woodpile as taking advantage of the homeless men. Todd also worked to create a municipal ice house (in the days before electric refrigerators, ice houses were a necessity) and to make utilities publicly owned. In the face of opposition from business leaders and Walker, the referendum on utilities failed at the ballot box. The ice house also failed to come to fruition, and apparently, Todd’s agenda went largely unrealized.

Todd did survive the recall effort that claimed Hutchinson, who resigned, and he remained the mayor of Grand Junction until 1914. To find out more about Todd, read the article by Jeanette Smith in the Journal of the Western Slope from which much of the information in the blog post was taken. And check out information about Todd and his home at 929 Main Street from David Sundal’s lecture on the architecture of Mesa County.