W.A.E. De Beque was one of the first doctors in the Grand Valley region in the late 1880’s, traveling the area to tend to the ailments of the people.  The first hospital in Mesa County was open from 1883-1886, just south of the Redlands Canal, where it saw its fair share of unpleasant diseases and injuries.

Myriad of human woes aside – who was taking care of the animals?

Dr. Alston P. Drew was one of the first known veterinarians in Colorado. Born in 1880 in Connecticut, he grew up on a farm which spurred his interest with helping friends of the four-legged variety. After attending the Ontario Veterinary College (the oldest veterinary school in Canada and the United States), he and his wife Marie moved to Grand Junction in 1902 for a change of climate to help alleviate ongoing health issues. When they arrived they had $5 in their pocket, barely enough money to get a little apartment off White Avenue between 3rd Street and 4th Street. 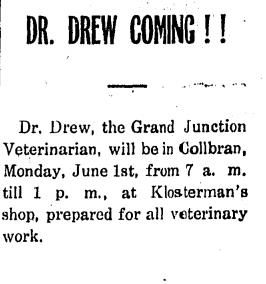 It was here that Dr. Drew first put his studies into action, renting an office space downtown and beginning to advertise his practice. His first call came from De Beque Canyon where a train wreck had left a carload of horses injured and in need of attending. He traveled to the calls on horseback with a satchel full of homemade medicines and medical tools.

Horse and buggy was the main mode of transportation in the early Mesa County days, so keeping the animals healthy and moving was high priority. Dr. Drew took calls from Collbran clear across the Valley to Glade Park. As business flourished, he was able to buy and hand-build a livery stable and barn at 546 Colorado Avenue downtown Grand Junction. This enabled him to have a base where folks could bring their horses and hold them overnight for surgeries or medical observation. He routinely healed injured and sick work horses, and also performed their dentistry.  Horse racing became a lifelong passion for the doctor and he helped train many fine race horses.  His reputation proceeded him around the region and a fellow Western Slope pioneer called him one of the best race horse doctors in the country.

Decades into Dr. Drew’s business, his assistant quit.  In need of help with his busy practice, Dr. Drew turned to his daughter Lillian’s husband, Dr. Russell Paige, to come assist with the veterinary services. In his interview with the Mesa County Oral History Project, Dr. Russell shared that his life in the Grand Valley region began in 1926 when he married Lillian.  He had graduated from Colorado Agricultural College in Fort Collins, and came over to learn a great deal about horses from his new boss, Dr. Drew.

One of Dr. Russell’s first solo jobs was to attend to an ill farm horse while Dr. Drew was on vacation. Dr. Drew left him a medicine kit with lots of elixirs in it, but shockingly, no labels.  To quickly adapt to this struggle, Dr. Russell had to smell and taste test nearly all of them to get an idea of their usage. Risky business! 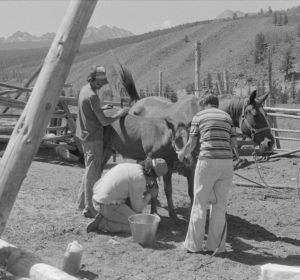 Through out his 50 years of veterinary services, Dr. Russell had success at a huge multitude of job descriptions.  He started off helping Dr. Drew and also working for the Bureau of Animal Industry, where he tested thousands of cattle for tuberculosis all over the western side of the state. Testing was often done in wintertime on range cattle in tremendous cold in the high country.  The doctors would drive a Model-T ford to their cabin accommodations, where they had to drain the radiator each evening, set the fluid on the stove, and warm it for the morning to be able to safely drive the next day.

In the 1930’s-1940’s, an illness simply referred to as “sleeping sickness” spread through the Colorado horse population like wildfire.  Dr. Russell said he thinks it first spread to Mesa County due to the visitation of the Barnum and Bailey circus. This virus was transmitted through mosquito bites, causing an inflammation of the brain and spinal cord that led to the inevitable death of many prized horses.  A panic arose to vaccinate the horses to stop the spread and save many settlers from financial loss of their trusty steeds.  Vaccinating the sick, sleepy horses kept Dr. Russell busy for many years.

Still an issue today that started back in the 1930’s, some horse owners turned to corrupt and incredibly unhealthy method of “doping” their race horses to perform faster on the track.  Heroin, whiskey, and coffee were all forced upon horses back in the day, which Dr. Russell would attempt to cure and combat with a cider syrup, cough medicines, and other elixirs.

Near the end of Dr. Russell’s career, he encouraged education by working for Mesa College at their agricultural training farm.  He provided lectures on animal husbandry, immunizations, and dairying to help educate eager-to-learn agricultural intellectuals in the Grand Valley. There’s no doubt that he and Dr. Drew were responsible for a great deal of progress in Mesa County, and helped pave the way for future veterinarians.