“I tell you it is time women should have a voice in the framing of laws that she has to obey and the time is surely coming when women will take her true position on  equality with man by the right of the ballot.” Mrs. Florence Watson, Summit County Journal, October 14, 1893

One hundred years ago on on August 18, 1920, the 19th amendment was ratified, giving women all over the United States the constitutional right to vote. This was no small feat as many early citizens were not excited for such change, and believed women should strictly concern themselves with domestic duties, keeping quiet and letting their husbands speak on political matters. Ladies with progressive views and a deep yearning for change emphasized the need for their voices to be heard and organized a large uprising comprised of steadily determined women. 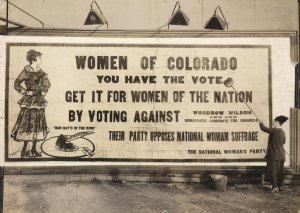 1916 billboard celebrating the right to vote in Colorado, urging opposition to Woodrow Wilson for his nonsupportive views. Source: Library of Congress

In late 1800’s, the desire for women’s rights in Colorado was growing larger by the minute.  Just next door, the territory of Wyoming was the first to grant full suffrage to women in 1869.  An important moment for Colorado occurred in 1877 when famous suffragist Susan B. Anthony gave a speech in Denver, crusading for women’s rights and hoping to propel the movement forward.  She had help from suffragettes Lucy Stone, Matilda Hindman, and Margaret Campbell. These women and many others fought tirelessly while touring the country, rallying and giving speeches to raise awareness for the cause.

Despite all the efforts sixteen years prior, the movement in Colorado was temporarily quelled until 1893. During this year, organized efforts towards the cause were generated by the Non-Partisan Equal Suffrage Association (previously named the Colorado Equal Suffrage Organization) They ramped up their campaign by recruiting speaker Carrie Lane Chapman Catt, who traveled the state and roused the masses with eloquent speeches said to be “better than gold.” As mentioned in the Grand Valley Star newspaper, Catt spoke in Mesa County at the Congregational Church in Grand Junction on September 30, 1893 where it was stated, ” When one-half the intelligence and population is shut off from representation a wrong exists, and woman must be placed on equality with man before the American republic can become what its fathers intended it should be – an ideal government.”

Victory did not come easy.  People from different walks of life had issues with women voting – one such group were conservative housewives.  Several domestic Colorado ladies expressed their opposing viewpoints in a Castle Rock Journal article written on October 4, 1893:

I think if the women attend to their duties at home properly they will have all that they can do.  They seem to have about all the rights they need.  They can rule best through their home. -Mrs. H. Duvall

I am undecided but think possibly unmarried women who pay taxes should have a right to vote. -Mrs. W. I. Whittier

It seems to me the women have all the rights they are entitled to.  They do as they have a mind to any way and I don’t know what more they need. – Mrs. C.C. Phillips 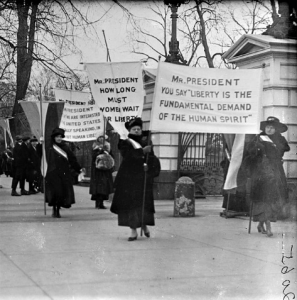 Perhaps the group most staunchly opposed to women receiving the right to vote were saloon keepers and brewery owners.  Their main fear was that women with their “purist nature” would decide to ban the sale of alcohol if they received voting rights. Saloon owners attempted to launch a last minute anti-suffrage campaign, putting up flyers all over Denver saloons to scare men from voting in favor of suffrage. In addition, ministers began delivering sermons on the evils of suffrage and the damaging role it could play on wives, mothers, and families.

In November 7, 1893 the women of Colorado achieved their dreams as they held a referendum and victoriously passed the law, giving women full voting rights.  Although Wyoming was the first territory to give women the right to vote, Colorado became the first official state to do so by popular referendum.  According to the book An Inventory of the Records of the Colorado Women’s Suffrage Association, “At the November 1893 election, the suffrage question won with a vote of 35,698 to 29,461.  The women of the state immediately moved into the political arena, with Mrs. John Routt (Eliza Routt) becoming the first registered woman voter in Colorado.” One year later, three women were elected to the Colorado House of Representatives.   Mesa County was a mix of republican and populist voters and voted largely in favor of suffrage.

Ladies and supportive gentlemen all over the country continued to fight the good fight and in 1920, nearly 30 years after Colorado’s suffrage success, the 19th amendment was passed.  Women across the United States were able to experience the joys and triumphs of finally having their voices count.

For more information on women’s suffrage, please check out the Mesa County Libraries catalog for a large compilation of books and movies on the subject. 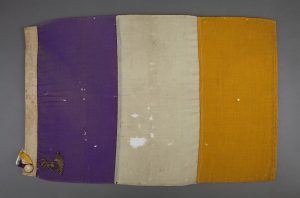 Flag of the suffrage movement comprised of its official colors: purple, white, and gold. Source: Smithsonian.