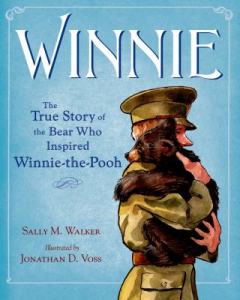 aked with joy when I saw this book on  Booklist Reader :  Winnie: The True Story of the Bear Who Inspired Winnie-the-Pooh  by Sally M. Walker.  Although it’s a children’s book, it appealed to me because of the cover art of a bear snuggling with a soldier and my abiding affection for Winnie the Pooh. It all began in 1914, when  Canadian Army Veterinary Corps lieutenant saw a man with a baby bear at an Ontario train station. Harry Colebourn  bought the bear and brought her to the army training camp in England. Bear and man became fast friends, and gentle Winnie turned into the camp’s mascot, marching with the soldiers and sleeping with Harry.  When the troops went to battle, however, Harry gave Winnie to the London Zoo, where it entertained children and was so docile it let them pet him.  One day, author A.A. Milne was at the zoo with his son,Christopher Robin, when they met Winnie, and literary magic was born.  Milne went on to write the very appealing Pooh stories, and children today still love Winnie the Pooh.