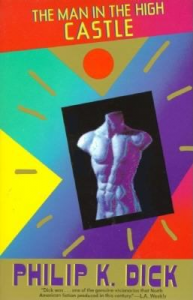 The Man in the High Castle is one of Philip K. Dick’s  most well-known books. In 1963 it won the Hugo Award for Best Novel. The book is an alternate history in which World War II lasted until 1947 and the United States is ruled by Nazi Germany and Imperial Japan in present day 1962.

Philip K. Dick is one of the most recognized Science Fiction writers and many of his novels deal with alternate realities, blurred identities, and have twisting plots. The Man in the High Castle is dark, intelligent, and haunting. It is also the basis of an extremely popular television series which started airing in early 2015. The show does a great job of capturing the dystopian world that the book it was based on.

Dick’s writing is no stranger to film. Blade Runner, Minority Report, A Scanner Darkly, and Total Recall were based on his works. Other notable books of his include Ubik, Flow My Tears, the Policeman Said, and Dr. Bloodmoney.

He would have been 87 years old on December 16.