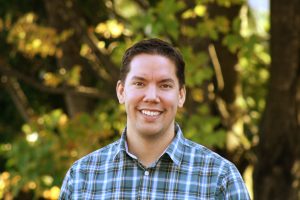 Mesa County Libraries’ third-annual Comic Con — a celebration of comic books, cosplay, sci-fi, fantasy, art, and pretty much all things awesomely nerdy — was held on October 7th. It was a smashing success, due in no small part to the wonderful fans and guests who attended the event.

Ian Doescher, author of William Shakespeare’s Star Wars book series, was our special guest this year. We were honored that he made the trip from his home in Portland, Oregon to share his work and passions with us. His presentation was as insightful as it was entertaining. He spoke about how he turned the iconic Star Wars movies into Shakespearean scripts. He also read from his books using a variety of voices, most of them hilarious. He even sang and rapped!

I was lucky enough to hang out with Ian a little after the event. As I had been in email contact with him for months, I had come to know him as a down-to-earth, generous, and funny guy. In person, he didn’t disappoint. In the library world, an author of his caliber and renown is a big deal. But he does not give off any airs you might expect from a successful author. In fact, in many ways, he is just an ordinary person. He told me about his “day job” at a marketing firm, his teenage boys, and how he met his wife. Both he and his wife are ordained ministers.

I imagine that the dozens of people who queued up to have Ian sign a book at Comic Con think of him as a literary star. And, really, he is. But he’s also a genuinely nice guy, with a great sense of humor. And thank goodness, as we flubbed the introduction to his presentation (if you were there, you know what I mean!).

If you weren’t able to make it to his presentation at Comic Con, we hope you’ll be able to catch him sometime in the future. And in the meantime, read his wonderful books!