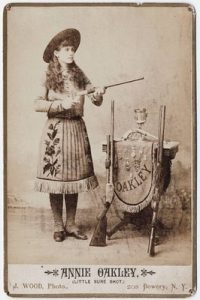 When I found out Annie Oakley’s birthday day was August 13, 1860, it reminded me of my girlhood enthusiasm for the petite sharpshooter from rural western Ohio. Born Phoebe Ann Mosey, Annie’s early years were marked by poverty and hardship. Her early interest in shooting was forbidden, and she says in her autobiography that “my mother…was perfectly horrified when I began shooting and tried to keep me in school, but I would run away and go quail shooting in the woods or trim my dresses with wreaths of wildflowers.” Bound out as a servant at age ten, to a family she later described as “the wolves, ” she ran away after almost two years of near-slavery, as a result of her being locked out of their cabin during a snowstorm for falling asleep over her darning.  Her hunting skills put food on her family’s table and helped her earn enough money to pay off her mother’s mortgage.  In 1875, she entered a shooting contest with Frank Butler, a sharpshooter from a traveling show. She matched him shot-for-shot and won, also winning Butler’s admiration and leading to a partnership and a long and devoted marriage. She joined Buffalo Bill’s Wild West Show in 1885, met and became friends with Sitting Bull, traveled to Europe to meet Queen Victoria, and along the way, worked to encourage women to learn to shoot and enjoy the outdoors,  saying, “I would like to see every woman know how to handle [firearms] as naturally as they know how to handle babies.”  Her life was filled with travel, meaningful adventures, and renown; when she died on November 3, 1926, her husband of fifty years died days later. Read more about Annie Oakley and her time with Buffalo Bill: 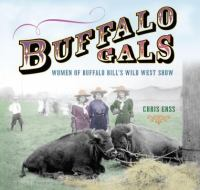