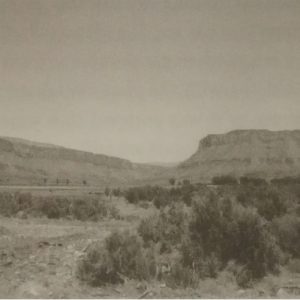 Paradox Valley, just south of Mesa County, was where an assortment of early western Colorado newcomers decided to homestead and create a life. Original settlers came to the area to raise cattle, and eventually Uranium and Copper mines began to pop up around the valley. The area looks peaceful enough with its sweeping mountainous views and climactic sandstone cliffs, but a grisly history lurks behind the endearing scenery.  Soon after mining in the area became more prominent, a curious breed of thieves and villains found their way to the tranquil valley. According to Howard E. Greager’s book “The Hell that was Paradox,” early settlers called Paradox Valley the “Slaughterhouse of the West” because of the abundance of shootouts, violent crimes, and murders occurring throughout the region.

In one particularly murder-drenched story, Mesa County Oral History Project interviewee Andrew Riddle shares a story sure to impress the strongest-stomached admirers of the gruesome.

Slim Hickox was known to be a cocky, eccentric man.  During the 1920’s, he was the caretaker of the Cashin Mine near Bedrock, Colorado, and enjoyed swaggering into town donning a packed money belt and a Colt .45.  The townsfolk grew used to seeing him, and they anticipated his visits when he came down from the mine to collect his mail and show off his riches. It was hard not to notice Slim, so when several weeks went by and he hadn’t stopped by the post office for his mail, the people of the town began to get curious.  They sent a local man named George up to the mine to check on Slim.  What George found was not so pleasant:

“…the horse was there, nobody around his cabin… he went up and looked at the horse and the horse could get to water but he hadn’t been fed.  So he fed him some hay and went to get him some grain…he went in and looked at the bin of oats and there was a dark stain on the floor by that oat bin.  So he opened the oat bin and started to get some oats out, and he hit something and there was a body down in there….he took the oats away and there was Slim Hickok’s body but it didn’t have any head on it!” – Andrew Riddle

There’s more to this disturbing tale, but here’s a disclaimer: you may not want to listen during lunch.

If you’d like to satisfy your macabre side and discover more about murders, crimes, or the hush-hush history of the Mesa County area, feel free to scroll through the Mesa County Oral History Project.  You can use specific key word searches to pinpoint an area of interest while browsing the local digital archives available in our catalog.