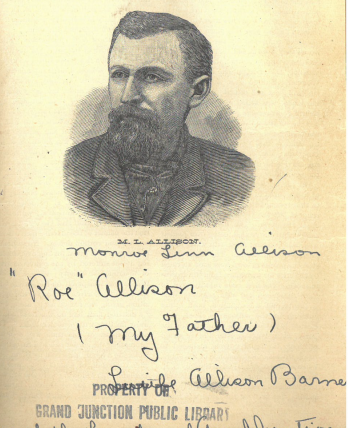 In addition to being a mayor of Grand Junction, Monroe (M.L.) Allison was an influential and connected person, at the very least he was well regarded by the town founder, George Crawford. Along with C.B. Rich, he was named an executor and trustee of Crawford’s will and estate. The Delta County Independent issue from February 10, 1891, included an article about the filing of Crawford’s will following his passing on January 26, 1891. Crawford’s will included a provision that if Allison and Rich realized more than $150,000 from the estate, the residual amount would be used to help fund a public library in Grand Junction and Delta. A future role of Mesa County Libraries must have weighed quite heavily in the mind of Crawford and his associates.

According to the 1880 Census, Allison was listed as a Missouri-born bachelor living in Ruby City, CO who made his living as a miner. By 1900, he had relocated to Grand Junction and lived on North 7th St. with his wife Rebecca and daughter Lucile, at that time, M.L. was working as a clerk for the City Water Company. M.L. passed away on November 21, 1918. Sometime prior to his passing, he signed a copy of the History and Business Directory of Mesa County by Charles W. Haskell from 1886.

His daughter Lucile also contributed to the book with a handwritten note. On the page with a drawing of M.L., she wrote the following.

By 1930, Lucile Allison Barnes was married to a Marion Y. Barnes and they were living in Klamath Falls, Oregon. It would be difficult to determine when she added the note but regardless, it was clearly important to her, and it’s a lasting memento of one of Grand Junction’s early families. 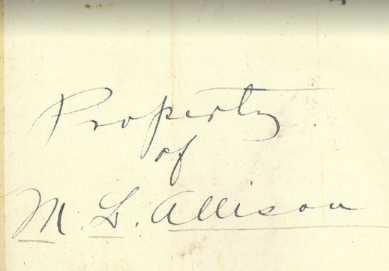