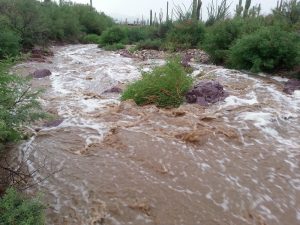 Residents of the American West are no strangers to the idea of flash floods, but having one actually crash down on you while you’re camped in a canyon is different altogether. In August of 1941, cowhand Merle Winters was camped in the Utah Bookcliffs in a canyon of Diamond Creek. Winters was working for the Turner Ranch, building a reservoir for pioneering rancher Albert Turner. Accompanying Winters was his younger brother William Winters, Laura Turner (wife of Albert Turner), and her son Warren Turner. Warren Turner and William Winters were both about 13 years old.

What Winters called a cloud burst opened up. The thunderstorm lasted for about 20 minutes. When a small flood came out of a side canyon, Winters urged Laura Turner to get to higher ground, but she was scared of lightning and refused. The four campers stayed put. You can listen now to Merle Winter’s depiction of what followed, or simply read on.

Winters went out to retrieve a pack saddle from the flood waters, which were about a foot deep at that time. Just then, a flood came roaring down the main canyon, with headwaters cresting at five feet deep. Winters could not get back to the campsite, where his brother and the two Taylors were standing on top of a table above the water. The flood waters flipped the table over. Mrs. Turner, in the words of Winters, “went down under the water and never came up.” Winters ran along the bank in pursuit of the two boys. His brother grabbed hold of the table and floated for several feet. He got hold of a cottonwood branch and when the flood waters went down after 20 minutes, Winters was able to pull him out. They heard a faint cry coming from a pile of driftwood. Warren Turner had become lodged in the drift, and was so muddy that at first, it was impossible to tell if he might be Laura Turner until they pulled him out, tired but alive. After a long search the next day, Mrs. Turner was found lodged in the same driftwood, but underwater. The coroner reported that she died not of drowning, but most probably of a heart condition related to her fright.

If you want to hear more from Merle Winters, including a description of American Indian ruins contained in the Turner-Look Site, you can listen to his full interview. You can also explore other Mesa County Oral History Project interviews and topics.