November gets a lot of recognition for Thanksgiving, but a different reason to celebrate this time of year is National Native American Heritage Month. Mesa County and its surrounding areas were once home to multiple Native American cultures; one of the earlier cultures was a group of Native people known as the Fremont.

The Fremont were named for the Fremont River Valley where artifacts were originally discovered. The Fremont culture was a nomadic hunter-gatherer group of people said to exist from about 300 A.D. to 1300 A.D. 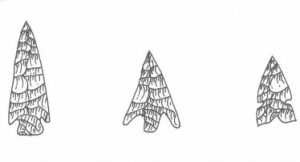 They were known to have grown corn, beans and squash, and lived in individual pit houses dug into the ground. The Fremont originally hunted with spears, as shown from the photo to the right, but these were soon replaced by bows and arrows.  As proven by petroglyphs found throughout Utah, the Fremont used their bows and arrows to hunt deer and other mammals dwelling in the area. Solid evidence of this can be found on a rock art panel in Nine Mile Canyon near Price, Utah, and is called the “Hunter Panel.” The panel exhibits petroglyphs (images carved into stone) depicting deer and anthropomorphic figures holding bows and arrows.

“Artifacts found from one Fremont site to the next are diverse, exemplifying their flexibility, but four characteristic artifact types are found throughout the Fremont region: a distinctive style of basketry, grayware pottery, a particular style of moccasin, and trapezoidal art figures.” – www.nps.gov

Proof of the Fremont culture has been found throughout regions of northwestern Colorado and eastern Utah.  According to “People of the Red Earth: American Indians of Colorado,” by Mesa County local Sally Crum, incredible artifacts such as bone gaming pieces and moccasins made of bighorn sheep hides have been discovered in these regions. Beautifully woven Fremont baskets coated in water-proof Gilsonite, a form of meltable asphalt, have been unveiled near the Book Cliffs north of Grand Junction, Colorado. 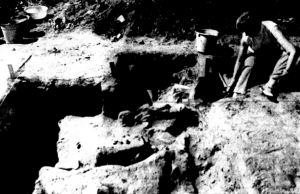 An re-excavation of Fremont culture artifacts during a dig in Paradox Valley, 1973.  Image source: Daily Sentinel, 9-23-1973.

The Fremont farmed the canyon lands around Glade Park, Colorado; there are rock art panels in the area proving these claims. In a Mesa County Oral History Project interview, local archaeologist and legend Al Look discusses excavating the Taylor Site in Unaweep Canyon of Mesa County during the first half of the 1900’s.  In 1952, the site was more thoroughly studied by famed archaeologist Hannah Marie Wormington. According to an article by Bob Silbernagel of the Daily Sentinel, several hundred artifacts were dug up from the area, and Al Look said the site contained, “4,800 cubic feet of untold history.”

Although the reasoning behind their disappearance isn’t entirely decided, it’s speculated that a large drought caused the Fremont people to migrate into other areas. The emergence of the Ute people and other tribes may have absorbed the Fremont into new cultures, blending customs and living spaces.

You can learn more about the Fremont people by enjoying the following titles, available in Mesa County Libaries’ catalog:

“Other Stories Not Guessed: the story of the Sevier Fremont Indian” by Kenneth Olson Kohler

“The Archaeology of Colorado” by Steve E. Cassells