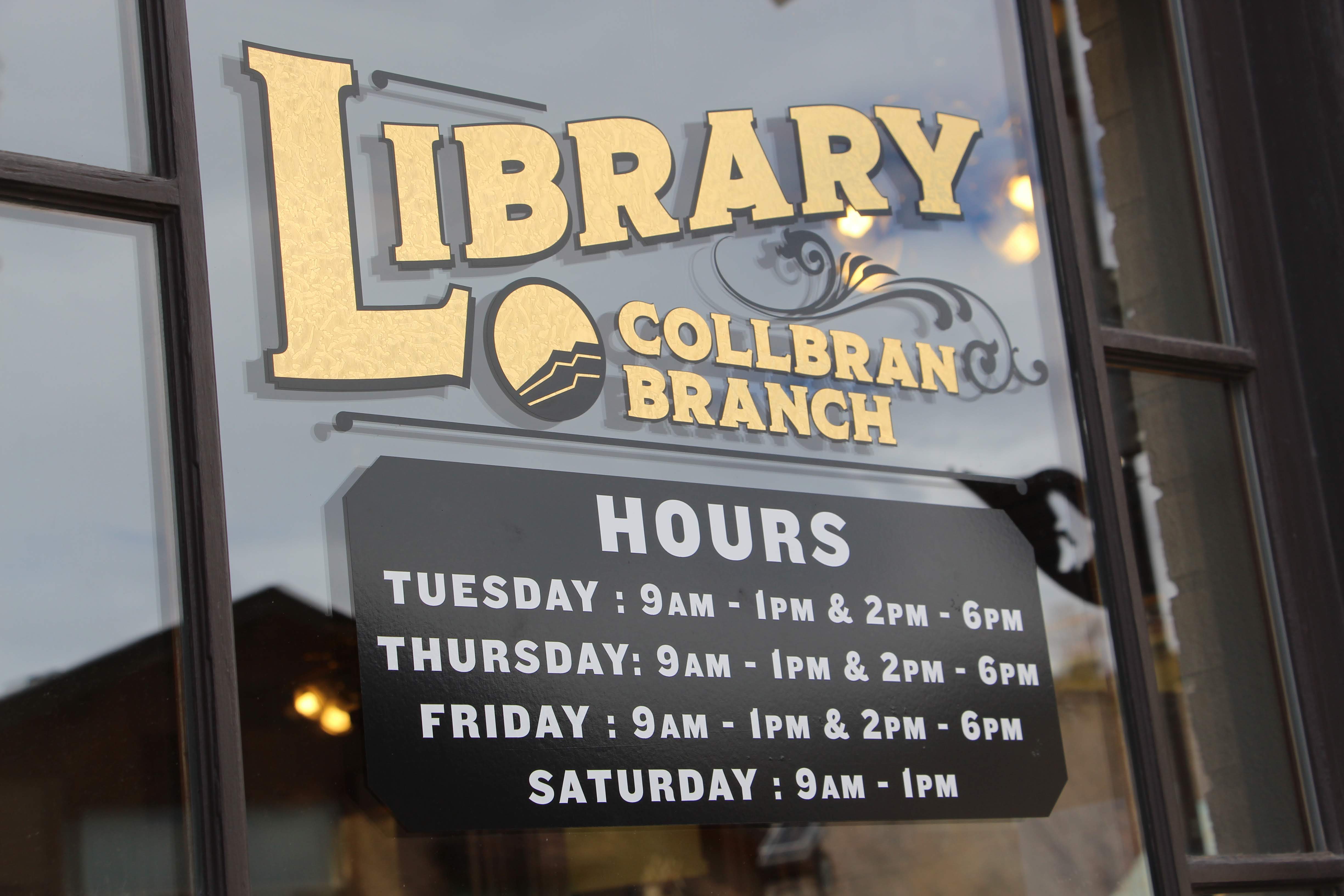 The new window sign at the Collbran Branch Library.

A newly installed window sign at the Collbran Branch Library is a unique design that pays homage to the community’s history. The new design was created by Mesa County Libraries through a deliberate process combining historical research with modern sign technology.

With assistance from the Plateau Valley Friends of the Library, the building became home to the Collbran Branch in 1991 after a remodel. The building front was restored with help from a Historical Society grant in 1995.

The building carries considerable charm, including the original bank safe. It contains attractive interior wood molding accents, unique iron work around the exterior windows and door, and decorative brickwork on the front facade, including “Stockmen’s Bank” in blue and white terracotta frieze.

While the building itself is a beautiful example of early 20th century western architecture, it has proved challenging to rebrand it as a Mesa County Libraries location. The building was added to the Colorado State Register of Historic Properties on March 8, 1995, so major modifications were out of the question.

Working with the town of Collbran, which owns the Stockmen’s Bank building, the library received approval to add window signage to the building to help identify it as a library and to prominently display library hours.

In an effort to match the charm and historical nature of the building, the library departed from its standard style for signage and focused on a design that would have been historically accurate to 1929. Specifically, we sought to replicate the hand-painted, gold leaf signs often found on bank, salon, and barbershop windows from that era.

Using historical photos of Plateau Valley and other western towns for reference, we developed a design that focuses on the word “Library.” Large, gold block serif letters scroll across the top of the design and are framed by hand-drawn ornaments. Mesa County Libraries’ colorful sunrise logo was redesigned as a two-color, gold and black logo to help unify the sign to the existing building elements.

Working with a sign vendor, Your Sign Company, we found a vinyl material that replicates a gold leaf texture while still being affordable and durable enough to hold up to the weather elements. The overall look is pretty stunning, both attracting attention to the library’s presence in downtown Collbran and adding new sparkle to the historic Stockmen’s Bank building.

The new window sign makes a handsome addition to the Collbran Branch.