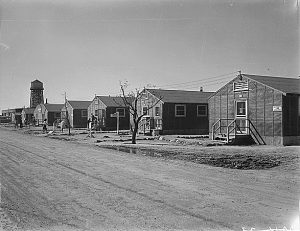 Adrienne Kaga has been a valued employee of Mesa County Libraries for many years. Our Fruita branch manager is an excellent research librarian. If you want a piece of information found, obscure or not, Adrienne can find it. She also speaks Spanish, German and fluent financial-ese, as her previous career as a principal in a private equity firm attests. Plus, she’s great with patrons. We will miss her when she retires. Luckily for us and the citizens of Mesa County, we now have Adrienne’s voice and likeness recorded on our website in perpetuity. In her new Mesa County Oral History Project interview, Adrienne provides important information about her parents and, especially, about the internment of her Japanese American father and his family during World War II.

Adrienne’s mother, Gay (Chin) Kaga was from a third or fourth-generation Chinese American family who worked in the laundry and restaurant businesses in Seattle. Her father, Shoji Kaga, was born to Japanese immigrants who farmed near Portland. When the United States entered World War II, Japanese Americans living on the West Coast were forcibly removed from their homes and placed in U.S. Government run internment camps throughout the Intermountain West. Young Shoji, his parents and siblings were all taken to the Minidoka War Relocation Center in Idaho.

In Minidoka, Shoji and his family worked, attended school, and went through the routines of daily life, such as they were in the camp. They lived in closer proximity to other Japanese Americans than they had in the past, which allowed the children a social outlet that didn’t exist as much before internment. Yet whatever fun the kids might have had did not disguise the fact that they lived in a prison camp, and that the adults in their lives had been deprived of their livelihoods and free will. They also knew that they faced unkind sentiment in American society, and that ethnic hatred for Japanese Americans was widespread. Only a very few prominent people spoke up for the rights of Japanese Americans. Governor Ralph Carr of Colorado was one such person, and while history has vindicated him and he is now lauded as a hero of civil rights, his stance at the time cost him a promising political career. In a cruel irony, Shoji was drafted just after his release from Minidoka at the end of the war, and went from being imprisoned in a U.S. Government internment camp for Japanese Americans to serving as part of the occupying army of Japan. 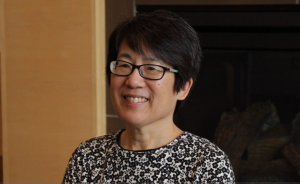 Shoji Kaga and his wife went on to live fruitful lives, he as a longtime employee of ITT in the Chicago area and she as an employee in an elementary school. And of course you now know a little about their successful daughter Adrienne. To learn more about life in Minidoka, about the internment of Japanese-Americans, about the story of Adrienne’s family, and about her interest in local agriculture, watch and listen to her interview.