Early Mesa County settler Peter Matteroli was the dentist who outlasted them all.

Peter felt anything but a warm welcome when he first decided to start his business in Grand Junction in the early 1900’s.  He rented a room on the 3rd floor in the Grand Valley National Bank Building (now the Dalby Wendland and Co. building) on 464 Main Street in Grand Junction, Colorado.  This building was well known in town for housing a multitude of up and coming dentists.  Peter had just passed the Dental State Board exams in Utah and came to Colorado to start anew.

In an interview with the Mesa County Oral History Project, Peter describes how he spent two months in De Beque helping out an acquaintance named Dr. Glare with his dentistry practice.  They quickly became partners before renting out three rooms in the Grand Valley National Bank building in Grand Junction for $15.00 each per month.  Before they were due to officially open their dentistry business, Dr. Glare backed out. Peter kept the rented rooms and opened up shop on his own. 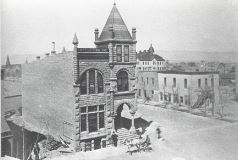 The original Grand Valley National Bank Building which stood from 1887-1910 on 5th and Main Street. Photo source: The Grand Heritage by Dave Fishell. 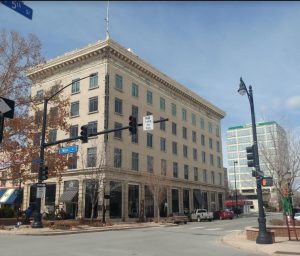 The present-day Dalby Wendland and Co. building established in 1910.

At that time, there were fourteen other dentists who had been using the premises for their businesses long before he did.  Peter recalls a time when he overheard a group of dentists talking about “running him out of town.” At this point, Peter could have turned the other cheek or left with his tail between his legs.  He chose to take the other road:

“…one of the dentists were saying they were going to run me out of town, that there were too many dentists in Grand Junction… I rented those rooms and everything… they thought they had too many dentists.  So I came back from lunch….I heard voices and I turned around and there were four or five dentists down there gabbing. I went down to my office and took off my coat and hat, and I thought those dentists are trying to run me out of town…so I went down there and said, ‘I know what you fellers are talking about and I want you to know one thing: I will be here if I don’t take in a dime in the next ten years, I’ll be here until you guys are gone.’ That’s what I told them.” – Peter Matteroli

He faced the gossipy men dead on and ended up staying in that building for fifty-three years.

Beyond the drama of getting settled in his profession at a new establishment, Peter also uses the Mesa County Oral History Project to discuss the unsettling technique of how a fellow dentist specialized in removing tonsils (hint: a metal wire was involved).

Peter is one of the many early Mesa County residents with stories to tell about the early days of our great county.  Listen to his story and more with the Mesa County Oral History Project.