“When my father reached this country, this little valley, to him it was the ideal place, the land of his dreams and he always said, and I quote: ‘This valley is a little bit of Heaven on Earth.” – Lucille Mahannah

In 1895, Lucille (Hunter) Mahannah was born in the southeast corner of an adobe brick home in northern Fruita, Colorado.  The house was part of the once prominent Hunter Ranch on 21 and J Road, land opened up by the Reclamation Service after Lucille’s father had first come to Mesa County to settle from Florida in 1880. 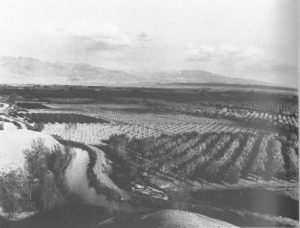 Lucille learned to swim in the Grand Valley Canal and was baptized at the age of twelve in the Colorado River off the banks of Fruita. These events, along with the endless hours spent horseback riding around the countryside, no doubt spurred her lifelong interest in the conservation and protection of Mesa County’s many natural resources.

In an interview with the Mesa County Oral History Project, Lucille explains becoming one of the first women to join the Mesa County Chapter of the Izaak Walton League of America, a conservation group founded in 1922 to conserve outdoor America for future generations.  The Izaak Walton League of Mesa County felt close to the land and were very active in keeping it clean.  Old-timers and newcomers of the valley joined together with the same common mission: “To conserve, restore, and promote the sustainable use and enjoyment of our natural resources, including soil, air, woods, waters, and wildlife.”

In the early 1900’s, it was a bit unusual for women to be included in a group that often spent their time getting dirty camping, hunting, fishing, and working outdoors.  Lucille helped with many efforts while a part of the League, including cleaning up the ditch, banks, and flower gardens in Palisade.  During the 1930’s, one of the projects she was most passionate about involved protecting the Colorado River against pollution by creating and maintaining sewage disposal areas.  The sewage was processed properly in a different location instead of getting dumped directly into the river, which was an outstanding development of its time.

In 1930’s Mesa County, the Izaak Walton League took great care in attempting to “blend the interests of cattlemen and sheepherders in the high mountain areas” to help prevent soil erosion and promote the seasonal growth of certain grasses.  A specific seed was provided by the Bureau of Land Management that would further assist their efforts.

The League also met to discuss working against the ever-growing issue of air pollution in the valley:

“We were among the first in a fresh new interest, in the fact that the valley had smog.  We could come into it from the canyon on the way to Glenwood and see the smog…We took a deep interest in the fact that the smog prevented warmth coming through, the exchange of air from the mountain to the valley, that protected in old time, the fruit blossoms.  But Palisade and Fruita were hard hit, until Fruita gave up its own apple and fruit growing to a large extent.” –Lucille Mahannah

Lucille’s love for Mesa County and the great outdoors led her through an interesting life, working as the Mesa County Director of Public Welfare in 1939, the Mesa County Volunteer Coordinator in 1947, and finally the County Superintendent of Schools from 1948 to 1963.  She was one of the many hardworking, intelligent women who undoubtedly served a large purpose in the positive evolution of Mesa County.