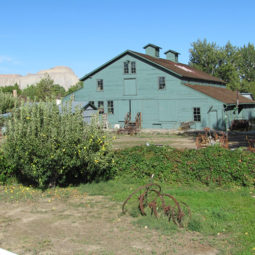 Cross Orchards. Photo used with permission of the Museums of Western Colorado.

Walter Bigelow Cross seems to have been a man of mystery to the people of Mesa County, Colorado, a well-off person who kept largely to himself and shared few details about his life. They were well aware that he owned Cross Orchards, one of the largest fruit growing operations in Colorado in the early Twentieth century, but details about him beyond that were sketchy. Jim Key, who worked at the Cross Ranch, simply knew him as the “Big Shot” who would sometimes come to town to look things over.

Mesa County Oral History Project interviewee Josephine Biggs was acquainted with Cross from their overlapping stays at Grand Junction’s prominent LaCourt Hotel in the early 1920’s. She had been sent to town by the Young Women’s Christian Association to organize a local YWCA (which failed to materialize). Cross, she said, stayed at the LaCourt for a couple months during the winter of each year, so that he could more closely manage Cross Orchards.

She knew him as “Colonel” Cross, an older, single man who had fine taste in horses and food, and who often let her ride his Arabian horse up 1st Street past First Fruitridge. Cross felt a kinship with Biggs because she had gone to Smith College in Massachusetts, and he himself was from New England. In fact, she supposed that he came to Grand Junction directly from Boston. In reality, Walter Cross had been living in Denver since at least 1880. Yet Cross seems to have kept this fact quiet, because none of the Mesa County Oral History Project interviews that mention him associate him with the Queen City of the Plains.

In addition, Cross must have let on something about his involvement in the shoe business, but not too much, because Biggs assumed that he must be associated with the then-famous Red Cross Shoe brand. Biggs made this false assumption based on the fact, no doubt, that the holding company for Cross Orchards was named the Red Cross Land and Fruit Company.

Walter Cross was born in Vermont. His father was Timothy Cross, who is listed in U.S. Census records from 1850-1870 as a tavern keeper, merchant, and retail grocer with a net worth in real estate equivalent to what would be around $100,000 today. His older sister Isabel Cross (shown living with Walter as children in Vermont in the 1860 U.S. Census), apparently bought the land on which Cross Orchards sits in 1896 along with her half-brother Daniel (shown living with Isabel as children in Vermont in the 1850 U.S. Census). She shortly consolidated holdings on the land by purchasing the acreage owned by Daniel. She offered public stock on Cross Orchards in 1899, but had no takers, and so incorporated the Red Cross Land and Fruit Company in 1909 (some information on Isabel was taken from the Museums of Western Colorado docent sheet).

Meanwhile, Walter Cross was living in Colorado by 1880. An 1880 U.S. Census Record shows a Walter B. Cross, born in Vermont, living alone in Denver, where he was listed as a boot and shoe wholesaler. He returned to New England in 1882 and married Carrie Ricker in Boston. The marriage apparently ended in divorce, as Ricker remarried in 1888. The 1882 Denver City Directory shows a Walter B. Cross in a business partnership called Noyes, Stark & Cross. The 1885 Denver City Directory shows him in a partnership with C.F. Sanborn in a boot and shoe company called Cross, Sanborn and Cross, located at 390 Larimer Street. And finally, the July 4, 1906 edition of the trade journal “Boot and Shoe Recorder” mentions a Walter Cross, owner of the Walk-Over shoe store, returning to Denver “after two months’ stay at his extensive fruit ranch at Grand Junction, Colo.” According to census records, Cross continued to live in Denver into the 1920’s and remained single. He died in Los Angeles in the 1930’s.

So there you have it. Walter Cross’s ownership of Cross Orchards may have had as much to do with his sister Isabel’s money as it did with his earnings from the shoe business. And he may have made his money in shoes, but not, it seems, with the Red Cross Shoe brand. To learn more about Cross Orchards or other local history, search the Mesa County Oral History Project.