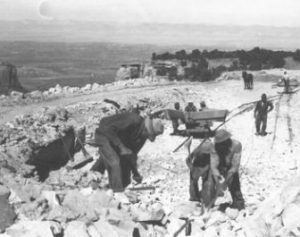 Members of the CCC working on the Serpent’s Trail in Colorado National Monument. Photo source: The National Park Service.

Between 1933 and 1942 if you were an unemployed man, there existed a Depression-era project called the Civilian Conservation Corps (CCC) that would bring you on board to work.  The CCC was created as part of President Franklin D. Roosevelt’s New Deal.  It existed throughout the United States as a public work relief program that employed millions of young men between the ages of 17-28. Here in Mesa County, the CCC worked on the Colorado National Monument helping to build Rim Rock Drive and Land’s End Road on the Grand Mesa.

In a 1976 Mesa County Oral History Project interview, Marshall (Mike) Douglass recalls his experience working as the Commanding Officer for the CCC camps up on Mesa County’s Colorado National Monument from 1936-1938. There was a bit of unrest felt by the workers due to difficult weather conditions and subpar management, so Douglass was sent in to help get things back on track and keep the employees motivated.

The camps housed workers sent up to help build Rim Rock Drive, construct tunnels, protect timber areas from fires, and perform maintenance.  Many young men took the work to help support their families back home, but a large number of the workers were transients.  “Transients who came in here on the railroad or any way they could get in here, and instead of bumming the street, they put them up there in that camp, “stated Douglass.

The men were paid about $54 a month and lived in the camps near their work areas.  During Douglass’s employment, there was a mess hall up on the Monument that could fit 200 workers and provided “the best food the government could buy.” The working conditions ranged from lamentable to wonderful, depending on who was in charge.  Douglass was the angel on the shoulder of the operation; he fought for the rights of the workers and boosted morale.  His wife even sewed curtains for the workers to make their mess hall feel homier.

If there were a devil to the story it would have been an angry old man named Thomas Sechrest, an officer in charge of construction at the same time as Douglass.  Douglass remembers his total disregard for the well-being of the workers:

“This man Sechrist had no sympathy for a human being, when I went up there as severe as the winter was, he wouldn’t even let the kids build a fire on the job. And they stayed out there until, actually I don’t know how they stood, because it was bitter, bitter cold. But, he wouldn’t let them build a fire. So the first thing I did was say, if you don’t let them build a fire out there on the job, so they can warm their hands, these men are not going to work for you. And he had no sympathy for a human being, he treated them just like dogs. It was a pitiful thing.” – Marshall Douglass

Sechrest was said to have never taken proper care of the equipment used by the workers, allowing the men to operate dangerous trucks in poor condition.  He had a mean temper and sent workers on jobs that proved to be deadly; in 1933 during the ill-advised creation of a tunnel, several men were put into an unsafe position. Sechrest took charge and forced the men to work on top of the tunnel and below simultaneously, and the tunnel collapsed. Nine men perished, falling to their death over the side of a cliff.

Sechrest was so awful that a group of CCC workers decided to show him their disdain with some major damage to personal property.  One day the employees “accidentally” threw large rocks on top of Sechrest’s car, smashing it to bits. Sechrest’s anger over the incident was heard far and wide.

Sechrest eventually disappeared, and the workers continued to help add to the beauty and efficiency of the trails and roads on the Colorado National Monument. Douglass appreciated his job and his employees, but during the rough times of construction he wondered about the validity of building Rim Rock Drive:

“…it is now a beautiful place, we used to just hate it, oh, the wind would blow and the dust would blow and it was bitter cold in the winter time. We used to say “my God, my God, they’re doing all this, they’re building all this thing and who in the world would want to come up here?” –Marshall Douglass

The Colorado National Monument saw 375,467 recreational visitors in 2018, thanks in part from the hard work of the young men of the CCC.

If you’d like to go outside and hike a trail built by hardworking members of the CCC themselves, the CCC Trail is a nice short hike in Mesa County’s very own backyard.  The Stone House built by the CCC in 1933, with the help of Sechrest, is also still standing; you can find it up on the National Monument at the intersection of the Saddlehorn Loop and Rim Rock Drive.