For all you Mesa County history fans out there, we have an excellent resource both on our shelves and available as eBooks online that could quench your thirst for more knowledge.  The “Journal of the Western Slope” was started by Colorado Mesa University, originally known as Mesa College. History Professor Paul Reddin was the creator of this intriguing little journal, and he kept it running for 17 years until its final edition in 2002.

Within the Journal of the Western Slope you can find intriguing stories and obscure Mesa County information written by researchers about the early days of the Grand Valley.  The journals were released quarterly by season, and to pay respects to the budding season of Summer, here are a few of my favorite volumes: 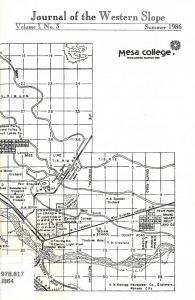 Rebecca A. Patton shares her knowledge in a piece titled “The Avalon Theater,” which discusses the booming social scene in early Grand Junction.  This includes information on Daily Sentinel owner Walter Walker’s involvement with helping bring in celebrity names to perform shows and music, the start of the Park Opera House built downtown in the 1890s, and the successes, trials, and tribulations of the newly opened Avalon Theater in 1923. 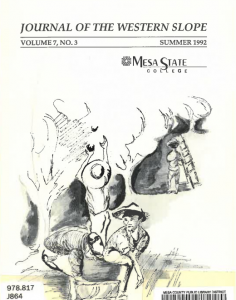 David Rowe writes about the Howard Lathrop Agricultural Center, a fully equipped farm created in 1885.  The Center originated as farmland used by the Teller Indian School, before it changed hands and become an agricultural plot for the Colorado State Home and Training School. The farm continued to go through varied stages of use and production until it was purchased by Mesa State College in 1978 and became a hands-on training hub for the Agricultural Program. 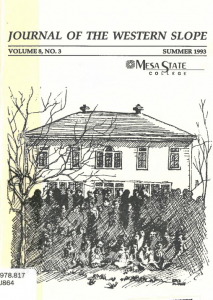 In “Cesspools, Alkali and  White Lily Soap: The Grand Junction Indian School, 1886-1911,” author Donald A. MacKendrick goes into detail about the Congress-established Teller Indian School.  This includes a chronological description of the school during its controversial existence, including daily activities, funding, health issues, and public opinion.

If you’d like to peek into Mesa County’s past through this fantastic resource, we have multiple physical copies available at Mesa County Central Library. If you’d prefer to read them without leaving the comforts of your home, click here to read the eBook versions available through our catalog.