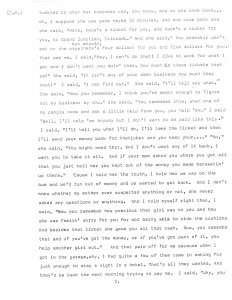 McFall describes receiving food and aid from a Salida madam as a young man.

When Glenn McFall was a teenager riding the rails and looking for work to support his mother and siblings, he landed flat broke in Salida. He had sent all the money he had earned back to his mother, not thinking to save anything for food. He and a friend went door-to-door, asking for something to eat. When he knocked on the door of a big house, a no-nonsense woman answered and asked the young McFall what he wanted. McFall explained their situation and asked if she could please spare some food. The woman demanded that they come in and proceeded to make them a huge breakfast. She then left for unspecified purposes, and told McFall and his friend to stay put. She came back with two tickets home to Grand Junction and some extra cash for the trip. When McFall protested, she told him to remember the kindness done for him by “one of her people” and to pay it forward. McFall had inadvertently gotten the help of a madam in a house of ill repute.

McFall was the kind of guy who bailed cowboys out of jail, even if he didn’t know them, when they came down from the mountains for a once-a-season rowdy binge. He also refused to join the Ku Klux Klan because he didn’t believe in discrimination against Catholics, and lost good friends over it. So perhaps it’s no surprise that when he was a little older and met a young prostitute in Grand Junction who needed help, he paid forward the kindness the Salida madam had done for him.

McFall was working as a mechanic on Main Street, and working girls who needed help would come by. He provided them with enough money for food and shelter, and asked nothing in return. In one instance, this kindness won the trust of a young woman, and she told him her tale of woe. 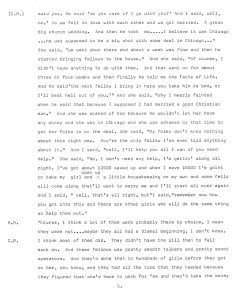 She had married a man from Chicago who had come into her small town in Western Colorado and swept her off her feet. He took her home to an apartment in the big city, where men started coming around. She didn’t understand why. Finally, he told her that she would sleep with those men or he would beat her up. She had a child while there, and she and the child eventually escaped back to Colorado. The child lived with relatives in the country, and the mother was prostituting herself in Grand Junction until she could save enough money to open her own housekeeping business. She offered to “pay back in trade” the money McFall had given her, but he refused, directing her instead to pay the good deed forward to someone else.

To learn more about McFall and about the history of prostitution on the Western Slope, check out the Mesa County Oral History Project.