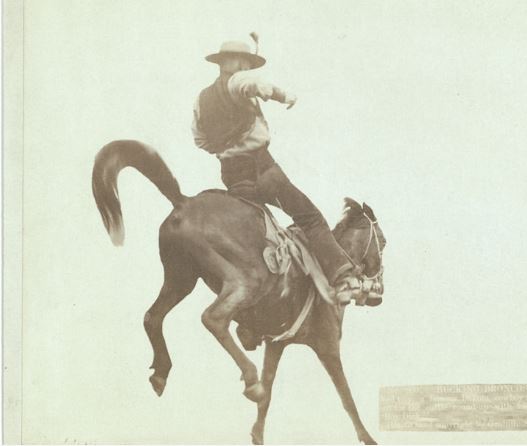 1888 cowboy on a bucking horse. Image source: Library of Congress.

Back in the wild, smartphone-less days of the west, sometimes all a man had to do with his time was to kick back, reflect, and write a bit of poetry.

Kip Wood was one such man.  Kip was an early Colorado pioneer and cowboy who spent a winter with Butch Cassidy and befriended local legend John “Peg-Leg” Foster, a pioneer who shot and killed a deranged man terrorizing the community of Paradox, Colorado. He resided in Telluride, Colorado much of his life but ended up in Mesa County where he was kind enough to allow the Museums of the West to set up an interview.  The Mesa County Oral History Project has his 1975 interview available here.

Kip led a life of excitement and occasional crime amidst his poetic years.  He was once arrested on a charge of cattle-rustling but escaped, leading the sheriff on a wild goose chase in the middle of the night during the fall of 1913.

Below is a poem Kip recited to interviewer Al Look about hard days for old-timers in the west.  Some of the words were difficult to decipher while listening to the 1970’s interview file, but if anyone is up on their cowboy lingo and wants to take a guess at what a “sink buckle” is, please enlighten us!

“Last of the West”

Our brandin’ irons is rusted

All through the slaughter pens

And the fact that stands is only

This useless set of poems

My curled saddle leather is hangin

In a dryin’ tree

Same as the (undecipherable)

To mother here and me

The rats have chewed my home up

Built nests in the ropes

Their trail leads down the valley

They will crawl on down on the slope

There’s nothing looks quite natural

Except perhaps the sky

The roof is cavin in

And the water hole is dry

In the rocks beneath the buttes

They crawled into their rough box (coffin)

For the Taylor Bill has broke us

And we’ve got no more to say

So we’ll step into our pickup

And slowly drive away

If God above provides for me

He surely will for you

Let us be up there smilin’

While the stars are shinin’ through…

Kip was 88 years old during his Mesa County Oral History Project interview and recited his poems from memory, some of which he had written 60 years prior. His interview is full of stories about outlaws, bar brawls, and corrupt jailers selling him moonshine.   If you’d like to listen to interviews that feel like stepping into an old-timey cowboy soap opera, head over to the Mesa County Oral History Project for hundreds of tales from our county’s original settlers.