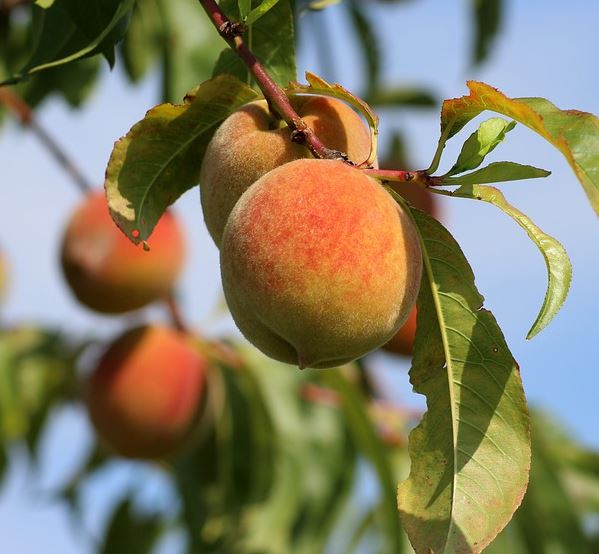 Palisade peach season– it’s finally here! For over 125 years Palisade, Colorado has been utilizing the area to grow peaches that are loved far and wide. The first peach trees were planted in 1882 by a man named John Harlow who described the peaches as “ripening in the sun acquired a brilliant color not found on peaches in the east or even in California.”

During the beginning of Mesa County’s fruitful (HA) history, many local residents lent a hand in the fruit farming operation.  Mesa County Oral History Project interviewee Edithe M. Hickman recalls that the peach harvest always started right around the beginning of school in the autumn.  If the timing wasn’t right, they would delay school from starting for a week so children and their parents could assist in the harvesting.

Forrest “Frosty” Tilton, an early 1900’s farmer and banker, fondly remembers the many different peach varieties back in the early 1900s.  The most common sort was called the free-stone Elberta.

“Several years ago I went to California and took some ripe peaches with me from Palisade, took ‘em on the plane so they were…didn’t get jostled and I gave them to some people in Santa Barbara who had some California peaches with them. And you taste one and the other and there was no comparison….We took a trip up in Canada and come back through peach country in Calgary and there were these great big fruit stands with these luscious looking peaches. We stopped and bought a sack of them. We just ate a few of them, tried to eat ‘em and finally threw the whole bunch out.” – Forrest “Frosty” Tilton

No other peaches dare to compare.

Madge E. Davis was another early citizen of Mesa County who worked on the Cross Ranch peach orchard during the summertime of 1912 with her family.  She recalls the operation of “thinning the peaches” which involved plucking out surplus peaches and leaving a space of about seven inches for the best-looking peaches to mature.  She worked ten hours a day at fifteen cents per hour.

The peach harvesting operation took many able hands and bodies, and correct timing of getting the fruits off the trees was pertinent.  In 1944, the region experienced a large shortage of workers.  During this crucial time in the peach game, German prisoners of World War ll were utilized to aid in the process. According to a Daily Sentinel July 4, 1944 article:

“To partially offset this shortage of 500 workers, it was stated this morning that arrangements were being made with the Mesa County Canners’ association to use 150 of the German war prisoners quartered near Fruita for work in canning plants over the valley. The workers can only be used in groups of 20.  They were brought into the valley under contract with the canners, and today’s arrangement were for their release for temporary peach work.”

Other orchards who were nearing the end of their harvests were ordered to send their workers to the late-ripening peach orchards where help was badly needed.

Be sure to visit the Palisade Peach Festival this weekend, August 15-18 to make your own memories this peach season.  Pop into Mesa County Libraries’ Palisade Branch if you need to wind down with a good book after the festivities.