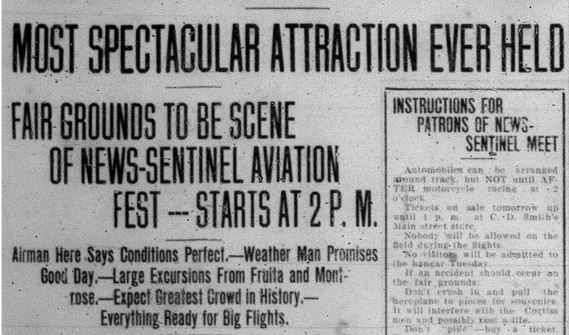 This past weekend, the Grand Junction Regional Airport in Colorado and West Star Aviation hosted a spectacular air show featuring the U.S. Navy Blue Angels.  The crowds looked on in awe as the experienced flyers executed great skill and performed exciting stunts over the Grand Valley region.  I feel accomplished when I parallel park my Toyota, so viewing these stuntman performing daring tricks high in the sky is certainly cause for admiration.

The air show looked quite different on August 27, 1912 when Charles Walsh was the star pilot of the area’s first big aviation show titled “Aviation Day” by the Daily News and the Daily Sentinel.

This groundbreaking and sky shaking event was held at the Grand Junction Fair Grounds, now Lincoln Park off North Avenue and 12th Street. According to an article in the Daily Sentinel on August 26, 1912, “Arrangements to handle the biggest crowd ever attending any affair in Western Colorado have been made and unless unseen events occur, the planefest will be witnessed by a record crowd.”

Charles Walsh was operating a biplane designed by his employer Glenn H. Curtiss, owner of the Curtiss Aircraft Company.  His plan to wow the crowds brought people from all areas of western Colorado, including Montrose, Paonia, Fruita, Loma, and Glenwood Springs. The Daily Sentinel stated that Fruita closed all businesses at noon the day of the show and arranged special Interurban Railway trips from town out to the fair grounds.

“A special train from Montrose, bearing 400 and 600 funseekers will arrive here at 11:30a.m…Special rates, granted by the railroads, have induced many people from the vicinity of Glenwood Springs, Rifle, De Beque, and Palisade.” –The Daily Sentinel, August 26, 1912 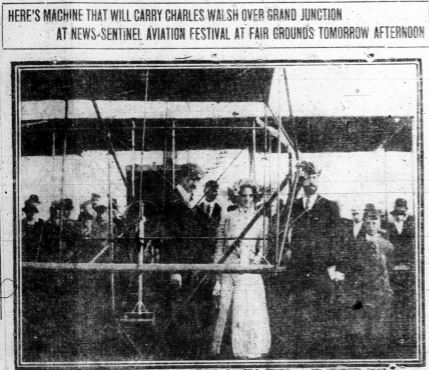 Charles drew “ooo’s” and “ahhh’s” from the crowds with the speed of his machine and his fancy spiral tricks.  He also executed a stunt where he dropped oranges on a whitewash target from high in the air. Nearly 5,000 people attended in 2012 and helped put the Grand Junction Air Show on the map.

Around 50 years later in 1965, the air show was presented at the location of Walker Field Airport, built in 1930.  A new runway extension of the airport was completed in 1965, giving spectators more room to be dazzled. The three hour show cost around $1,000, which would be about $8,000 today.

More than 100 years after Charles Walsh’s big debut, the Air Show is still an exciting summertime event here in the Grand Valley region.