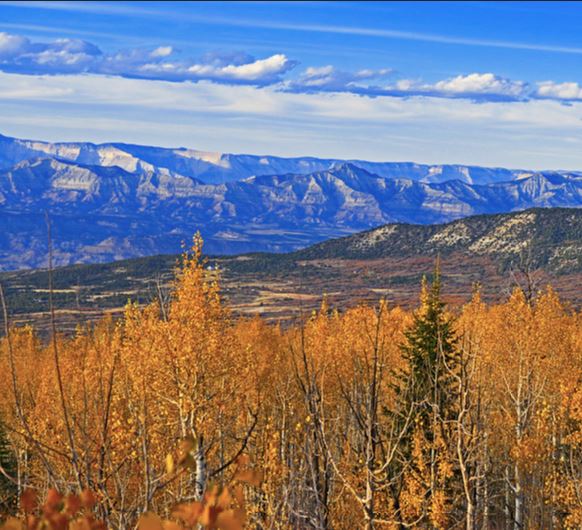 One of the most desirable spots for recreation in all of Mesa County is unarguably the Grand Mesa. At an area of about 500 square miles, the Grand Mesa is the world’s largest flat-top mountain. Tens of thousands of years ago, this geologically unique feature was born from a burst of extreme volcanic activity, causing the top 200 to 300 ft of the Mesa to become capped with basalt formed by hardened lava flows.

The history of the Grand Mesa is as sprawling as its landmass, and at the core of much of it lies a previous civilization: the Ute people.  Evidence of the Ute tribe living atop the Grand Mesa is ample and long-running; it’s said there are still visible trails the Utes once used to traverse the forests.  According to the book Grand Mesa: World’s Largest Flat Top Mountain by James and Christine Beebe Keener, “The first encounter white Europeans had with the Grand Mesa came when the Dominguez and Escalante Expedition of 1776 was guided by a Ute Indian to Ute encampment on Grand Mesa.” Evidence implies the Utes lived there seasonally and took part in the abundance of hunting opportunities during the summer months, moving on to avoid the severe winter weather.

A bloody and complicated episode in our state’s history involving the Utes occurred while they were living on the White River Indian Reservation of Meeker, Colorado.  The Ute people were living on this land when the Bureau of Indian Affairs appointed Nathan Meeker as their Indian Agent, supposedly to help them learn how to become farmers and work the land. The Utes soon grew tired of Meeker’s harsh treatment and forced agricultural changes placed upon their hunter-gatherer lifestyle.  On a September day in 1879, the Utes executed an uprising and killed eleven of Meeker’s men, Meeker included.  This event became known as the Meeker Massacre.

Immediately after the Meeker Massacre, Chief Douglas, one of the main organizers of the uprising, kidnapped Nathan Meeker’s wife Arvilla, their daughter Josephine, and three others before fleeing towards the Grand Mesa.  Once they arrived on the Mesa, Chief Douglas set up camp in an area now known as Mesa Creek. Chief Douglas is rumored to have tied the kidnapped Meekers to a specific Juniper tree at Mesa Creek that has been deemed “The Surrender Tree” or the “Meeker Tree.”

In the book titled Island in the Sky by Muriel Marshall, it’s stated that Arvilla Meeker and her child were rescued with the help of Ute Chief Ouray.  Ouray had tried to put a stop to the White River Ute uprising in fear of it costing the Utes their homelands.  Ute War Chief Shavano and ex-Indian Agent Carl Adams led the rescue mission up a brutally vertical deer trail now known as Land’s End Road on the Grand Mesa, originally called Whitewater Point Route. Once they arrived to Mesa Creek, they came upon the camp where Arvilla Meeker and others were being held.  The kidnapped Meekers were released, and the Utes were forced to move on to even smaller reservations throughout the southwest corners of the state.

As for the Surrender Tree, it still stands today in a field on private property high up on the Mesa. Mesa County Oral History Project interviewee Dottie de Hart Wiley was an early 1900’s settler and homesteader on the Grand Mesa.  Dottie’s first husband was Richard Kilburn, owner of the Kilburn homestead, the property where the Surrender Tree is located.

Dottie remembers being able to gaze out her living room window at the Surrender Tree and has since taken her grandchildren to see the infamous landmark and homestead where their great grandfather lived. She feels the tree should be memorialized with a sign for the history it holds. Below is a clip of Dottie describing the tree and what it means to her personally:

For more on the history of the Grand Mesa or others areas of beautiful Mesa County, check out the Mesa County Oral History Project.