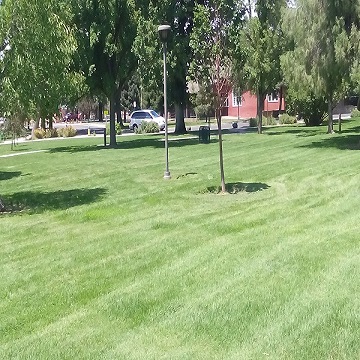 Did you know that the Mesa County Fairgrounds at Veteran’s Memorial Park were once known as Uranium Downs? People who attended horse races, motocross, WWF style “wrestling,” and other events back in the day might remember this nod to Mesa County’s mining (and radioactive) legacy.

The Mesa County Fairgrounds opened in their current location in Orchard Mesa sometime after 1925. Prior to that time, the fairgrounds were at what is now Lincoln Park. There, people saw early flight demonstrations, rodeos, baseball games, and, of course, the county fair.

It was common for members of the Ute Uncompahgre band to camp in the fairgrounds during the fair. Horseracing was very popular, and fencing around the track went down the middle of what is now Gunnison Avenue. The entrance to the fairgrounds was near the Lincoln Park Barn, an historic building that survives.

The City of Grand Junction purchased the fairgrounds from Mesa County in 1917 and renamed the land Lincoln Park, but the park continued to house the fairgrounds. When construction on the neighborhood known as Lincoln Park Addition began in 1925, Gunnison Avenue was extended from 12th Street east. With the end of apple farming and the building of homes and businesses along North Avenue, the park was too hemmed in by development to support large, agricultural events. The fairgrounds moved to Orchard Mesa shortly after. 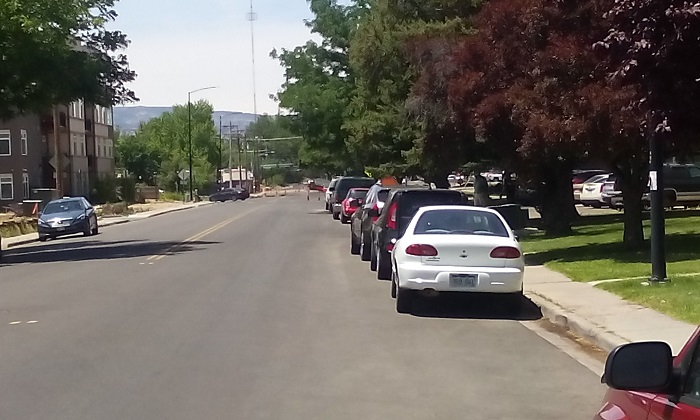 Bookcliff Avenue looking west toward 7th Street from 9th Street, in the approximate location of what were probably Mesa County’s first fairgrounds.