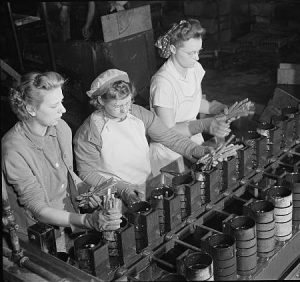 If you’re at all drawn to Martha Stewart, Pinterest, and food preservation, you may get excited about canning fruits and vegetables.  This process has been used for generations to sustain foods in airtight storage to last through tumultuous winters, or simply to snack on during any season.

With the abundance of early 1900s fruit and vegetable farmers producing acres of deliciousness across the Grand Valley, it’s no surprise that Mesa County was once home to multiple canning companies. In 1912 there were were three canning companies in Mesa County: The Currie Canning Company in Grand Junction, the Loma Canning and Preserving Company, and the Fruita Canning and Preserving Company.

According to historic7thstreet.org, the popular Currie Canning Company began in 1911 by owner Arthur Currie at 8th Street and 1st Avenue in Grand Junction.  The operation was said to be very well-ran and the work plentiful.  By 1920 it was one of the 20 largest canning operations in the entire United States, putting out a great deal of product daily.  Due to an early frost warning in September of 1921, the canning company received a rushed surplus of tomatoes from local farmers.  The Montrose Daily Press stated that, “When the factory closed that evening, the records showed the pack of the day to have been 25,000 small cans of tomatoes, 3,700 balloon cans, and 1,600-gallon cans of ketchup (“40,000 Cans Put up One Day in G.J.” Montrose Daily Press 29 Sept. 1921: p.2).”

Labor was sought by all sorts of folks to keep the canning operations flowing at the right rate. Several of Mesa County Oral History Project’s interviewees were employed by the Currie Canning Company during a specific point in their lives.  Dominick Arcieri was born in Italy in 1902 and emigrated to Mesa County in 1913.  Years later, he bought land near what is now Edgewater Brewing and began growing thousands of tomatoes a year to help the company produce ketchup.

The Currie Canning Company also produced apple butter in high demand and had a great abundance of apples to tend to during fall time. Women specifically were called upon during 1917 from all areas of Western Colorado to help Arthur Currie during apple season.  An article written in November of 1917 stated:

“The Currie Canning Company in Grand Junction is making a desperate appeal over the western slope for more women to help them thru the apple season in the canning plant. It is a good opportunity for Montrose county women. The work will probably last until Christmas, Mr. Currie states. He has a splendid, steam heated canning plant with all the most modern machinery. The work is 5 hours per day and most agreeable. It will be a first-class opportunity for any women here who want a good position for several weeks. The Currie Canning company is the biggest plant of its kind in Colorado and growing with a steady roar of business.  Mr. Currie is an exceptionally clever businessman and has built his plant thru several years into the huge affair it now is. The apples are all peeled by machinery and the women run the paring machines. It is interesting work and the pay is very good. If any are interested they can refer to the Currie ad in this issue…(“Women Wanted by Score in G.J.” Montrose Daily Press 2 Nov. 1917: p.2)“

This wasn’t the last time the canning company needed to seek labor assistance.

Arthur Currie decided to take a rest in 1935 and sold the Currie Canning Company to a Loveland-based cannery called the Kuner-Empson Canning Company. During the next decade Kuner-Empson experienced a shortage of laborers due in part to World War II.  German prisoners of the war being housed at the Civilian Conservation Corps (CCC) camp across the Colorado River in Fruita were utilized for labor at the canning facility.  As stated in a Daily Sentinel article in October of 1944, due to a quick surplus of tomatoes, seniors from Grand Junction High School were given work release to help with the canning process.

The Kuner-Empson Canning Company had many long, successful, ketchup-filled years but felt great hardship during the 1960s due to more labor shortages, harsh weather, etc., and eventually shut down in 1970. During the 69 years of Currie and Kuner-Empson, the abundance of canned apples, string beans, cherries, cucumbers, peaches, and tomatoes undoubtedly helped boost the economy and the amount of yummy foods available to Mesa County residents.

(Bits of information for this blog was discovered from Colorado Historic Newspapers, a database available through Mesa County Libraries’ catalog.  If you’re in need of information on our area’s past, check out this fascinating resource!)