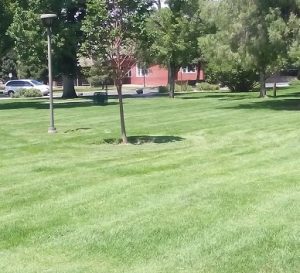 Most Grand Junctionites know about Rocket Park, Lincoln Park, and the other larger parks that draw kids from throughout the valley. But the city also has some quirky little parks that not many people know about.

Hillcrest Park forms the inner part of a cul-de-sac in the Hillcrest neighborhood, bears no sign that I can recall, and, except for a volleyball net sometimes draped across the narrow area, is almost secret in its designation as a park.

Or what about the little parks tucked into the Ridges Neighborhood that no one outside the neighborhood seems to know about? Duck Pond Park, just off Ridges Drive, has a slide, a play earthmover and a little algae pond, while Ridges Tot Lot Park includes tennis courts and a larger play area.

The original Duckpond Park, on Unaweep Avenue at Highway 50, is a cozy, little grassy area in which you will spend your time down in a shallow ravine or up on the slopes, making any game of catch interesting (not to mention soccer). According to Auctioneer Howard M. Shults in his interview with the Mesa County Oral History Project (MCOHP), the park was built sometime around 1940, after he and his auctioneer partner O.M. Hopkins sold part of their stockyard and sale yard to the city, before moving their business to the Durham Stockyards near the Colorado River.

Then there is Village Nine Park on Orchard Mesa. According to my coworker, the park had a piece of playground equipment that resembled a snail in the 1980’s, and so was known colloquially (at least in her family) as Snail Park.

Last but not least, we have Lilac Park, a small green space shoved up against busy North Avenue where it becomes the I-70 Business Loop. According to MCOHP interviewee Dudley Mitchell, the area was first known as Carpenter’s Pond, created when pioneer Susan Etta (Lewis) Carpenter, wife of Mesa County Bank and Little Book Cliff Railway founder William Carpenter, dammed an arroyo that once went through what later became Sherwood Park. The arroyo apparently cut down First Street after leaving Sherwood, went through the intersection of First and North Avenue, and drained into the small ravine that forms the current Lilac Park. That’s where Susan Carpenter constructed her dam and made the pond, along with paths and other amenities. Interestingly, she also founded the First Church of Christ Scientist in Grand Junction.

Do you have a favorite local park? Let us know about it in the comments section.