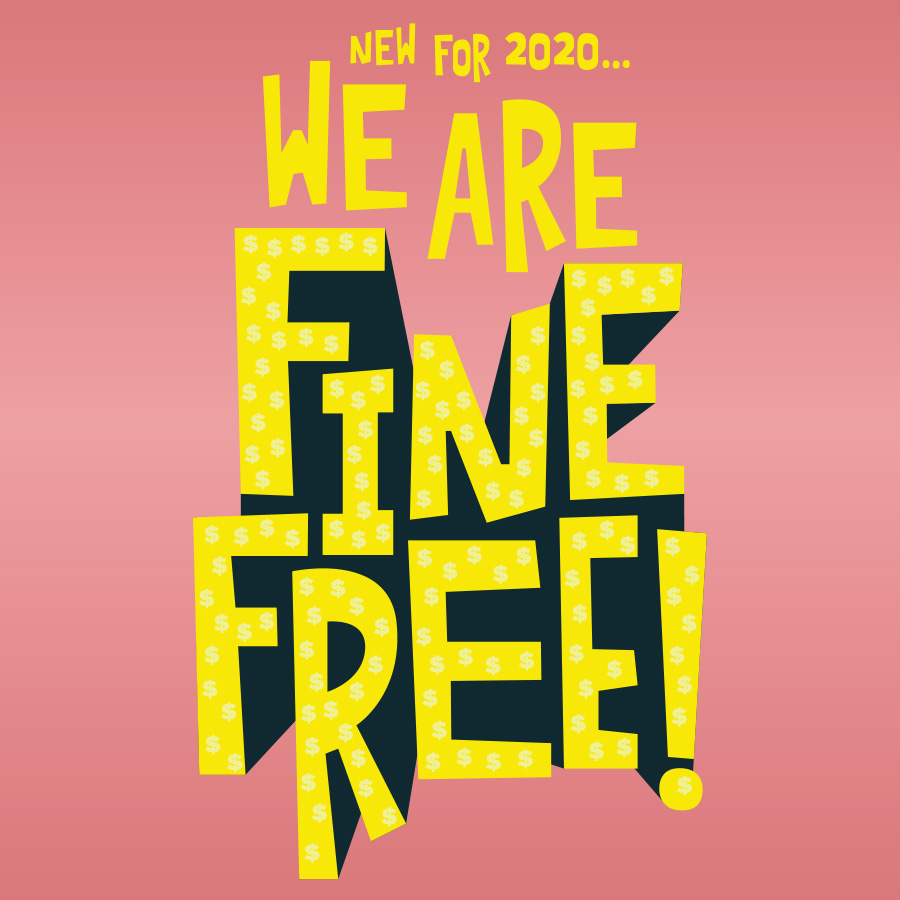 As of Jan. 1, 2020, Mesa County Libraries no longer charge overdue fines on books and other items, and all accumulated fines for overdue materials have been waived.

Today, we wish to welcome back more than 5,800 library patrons who were blocked from further checkouts because of accumulated fines exceeding $10. With overdue fines waived, those patrons now may enjoy full library privileges.

Overdue fines may be more of a deterrent to using the library than an incentive for returning materials, and waiving them is the library’s way of welcoming back patrons who could no longer fully utilize the library because they owed fines. Other libraries that have eliminated overdue fines report that a significant number of former patrons are returning, and some libraries have seen an increase in the return of overdue and lost materials.

The new policy was approved by the Mesa County Libraries Board of Trustees in December 2019 in order to increase patron access to library resources. (For details, see our earlier announcement about the fine-elimination policy here.)

We know that some patrons accumulate overdue fines because of factors such as their financial situation and/or inability to find timely transportation to a library location. Restricting library use by individuals in hardship situations does not provide an incentive to return materials or pay accumulated fines. The library’s analysis shows that the highest average fines owed per patron occurred in ZIP codes with relatively low per capita incomes – the population that needs certain library services most.

In addition, anecdotal evidence shows that some patrons who owe fines to the library are reluctant to further use the library. The library believes that no one should feel discouraged from using library resources because of accumulated overdue fines. Such fines were never intended to serve as a deterrent to using the library.

Overdue fines were eliminated for all Mesa County Libraries-owned materials that we lend to patrons, including books, DVDs, and special equipment such as camera kits. Borrowers of high-value special equipment such as cameras may be asked to sign a borrower agreement at checkout to ensure they understand the importance of returning those items on time.

I was billed for a lost book. Do I still have to pay?

Yes. The new policy applies only to overdue fines. Billed charges for unreturned, damaged, or incomplete items will remain in force. In addition, items borrowed from other libraries (such as through interlibrary loan) are subject to the rules and regulations of the loaning libraries, so overdue fines may continue to be charged on those items.

Does this mean I can keep library items as long as I want, regardless of due date?

No. Library patrons are still expected to return items on or before the due date. Notifications will be sent on the customary schedule (see below), and items not returned 30 days after they are due will be billed to the cardholder.

Courtesy Notice: Three days before due date by email or text

First Overdue Notice: One week after due date by email or text

Will people keep library materials longer if they don’t have to pay overdue fines?

Does this mean patrons must wait longer for holds?

Libraries that have eliminated fines generally report that most materials continue to be returned on time or within one week of the return date. Hold times – the amount of time patrons must wait for items to be returned by other patrons – were generally unchanged after libraries eliminated fines. Mesa County Libraries will carefully monitor returns, hold times, and other metrics to ensure that the elimination of fines does not diminish the library’s convenience to patrons.

How will this affect Mesa County Libraries’ budget?

Fines account for approximately 1% of Mesa County Libraries’ $7 million annual budget, and that percentage has been dropping since the library started using automatic renewals in September 2019. In the library’s view, giving up 1% of annual revenue in order to increase patron access to library resources is a worthwhile goal.