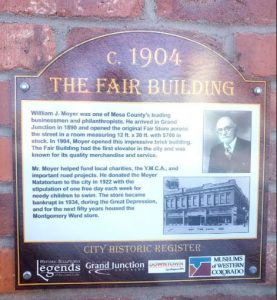 A National Historic Registry plaque honoring the history of The Fair Store, located at 501 Main Street in Grand Junction.

“The Fair Store Floor Walker,” sounds like a creepy story about some ghost shuffling around an old abandoned building.  Sorry to disappointment any horror fans out there –  “floor walker” is actually a job title given to early Grand Junction resident Jennie Elizabeth Dixon.

In the early to mid-1900s, a floor walker was a person who worked at a retail store or market and quite literally walked the floor to observe customer activity.  One task of the position involved pointing customers in the right direction towards specific products. In modern times, the floor walker still exists and is usually referred to as a retail associate. Another part of the floor walker job of the past involved a bit of undercover spy work.

At one point in her life, Jennie Elizabeth Dixon worked for The Fair Store on the corner of 5th and Main Street in Grand Junction. It was owned by local celebrity William Moyer and from 1905-1930s was one of the largest retail businesses in western Colorado, donning the first elevator in the city and shipping quality and hard-to-find goods from Denver to appease picky customers.  Jennie remembers the Fair Store having huge sales where they would blind all the windows, open the front door on Main Street and let as many people in as possible before shutting and locking the door. Once inside, customers could buy as much as they wanted and exit the door on the 5th Street side.  A man Jennie remembers by the name of Herman would check the customers’ receipts at the door before letting them leave the building.

Jennie’s job as a floor walker was to walk around undercover (she mentioned usually wearing a spiffy hat for disguise) and posing as a fellow shopper.  It’s a bit like secret shopping, except Jennie didn’t get to sample any of the perks – she was there solely to catch criminals in the act. While walking around, she would take notice of any suspicious activity or shoplifters.  She recalls that back in the day, a business was unable to do anything with a shoplifter while they were inside the building, but as soon as they exited with the stolen goods she was free to report them to the authorities.  At the end of the day and despite her best efforts, Jennie remembers a great deal of inventory marked as stolen during these large seasonal sales.

The Fair Store thrived for many successful years up until the Great Depression, despite the petty thefts.  You can read more about the history of this old Main Street business and others by visiting the Mesa County Oral History Project.