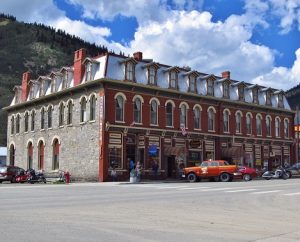 “Silverton, Colorado” by Jasperdo is licensed under CC BY-NC-ND 2.0

If you have ever taken the Durango Silverton or stopped in Silverton for a rest during a nail biting and beautiful drive on Highway 50, you may have come across the Grand Imperial Hotel, an old and intriguing building that thrives with tourist traffic.

Is the Grand Imperial Hotel haunted? It might be, according to the Durango Herald. If lawsuits targeting the Durango & Silverton Railroad are successful, will the co-owners of the railway and hotel be forced to sell? We can’t provide the answer to either of these intriguing questions, but, you can learn about the history of the Grand Imperial Hotel by reading this blog post.

The Grand Imperial Hotel was originally known as the Grand Hotel and was part of the Thompson Block commissioned by W.S. Thompson in 1882, with construction completed in 1883. According to the website of the still extant hotel, it was the largest structure south of Denver at that time and a “pinnacle of luxury” in the Southwest. Its first floor housed the post office, bank, Bureau of Mines, general store, doctor’s office, and Silverton Standard Newspaper. The second floor housed the county and town governments.

The hotel was purchased by Winfield Morton of Texas in 1950, but he went into foreclosure after lavishly refurbishing the hotel (Dave Fishell, “Silverton’s Imperial Hotel,” The Daily Sentinel, March 23, 1980). Longtime Silverton resident Lew Parcell became the hotel’s owner-manager in 1958. With the help of employee Ella Kinterknecht, he ran the hotel until selling out to the Broadmoor Hotel’s ownership group in 1963. It was remodeled in 2015, and is now owned by American Heritage Railway Hotels, whose owners are also affiliated with the Durango & Silverton Narrow Gauge Railroad. The name of the hotel changed over the years to Imperial Hotel, and then to Grand Imperial Hotel.

Find out more about the history of Silverton and the Grand Imperial by listening to a lecture given by Parcel and Kinterknecht, and to Kinterknecht’s interview with the Mesa County Oral History Project. Also, check out the many great images of Silverton postcards that the Ft. Lewis College library has made available through the catalog, including several of the Grand Imperial Hotel.