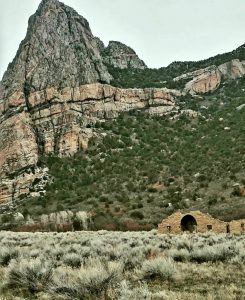 The Driggs Mansion with Thimble Rock in the background.

Within the first few months of moving to Grand Junction, I went out for a cloudy day drive on Highway 141 up to Gateway, Colorado. This day trip had been recommended to me by many locals for its incredible beauty, and those recommendations were 100% accurate.  With sweeping canyon views, verdant sagebrush fields and plentiful open space, the landscape beckons you to stay a little longer than planned.

It’s possible that William B. Foy felt the same way when he arrived in Gateway in 1901.  William is the grandfather of Mesa County Oral History Project interviewee Nellie (Foy) Massey, and was part of one of the first families to migrate from Moab, Utah to settle and help name the town of Gateway.   Nellie’s husband Weston Massey sums up the general feeling settlers experienced living in the Gateway area: “No matter the hardships, if you get to live in this part of the country you’re lucky.”

One of the most eye-catching historical structures of Mesa County still standing near Gateway is the Driggs Mansion in Unaweep Canyon.  In 1914 a new pioneer to the area named Laurence LaTourette Driggs filed a homestead claim for a plot of land.  This is the spot where the six room stone Driggs Mansion came to fruition four years later.  To build his Unaweep Canyon dream home, Driggs hired renowned Grand Junction stone mason Nunzio Grasso, who also built Mesa County’s Redlands Community Center, the Lincoln Park golf club house, and Fruita’s Sacred Heart Catholic Church.  The structure is now on the Colorado National Historic Registry, whose website states that the stones used to build Driggs Mansion were gathered from Mayflower Canyon across the road from the homestead.

As the story goes, the extravagant building created for Laurence and his wife was only utilized for a few weeks before the wife decided that the Western lifestyle was not for her.  The couple sold the property in 1923 and according to “Whitewater” by Carol M. Anderson, the homestead eventually became a hunting lodge called Chateau Thimblerock. Time mixed with vandalism has crumbled the structure to half its original glory, but the site still stands as a reminder of the county’s extensive pioneer past.

The Driggs Mansion with Thimble Rock in the background is one of the prettiest viewpoints in all of Mesa County.  Take a drive to explore for yourself, and while you’re up there, head over to utilize your library card at Mesa County Libraries Gateway branch.