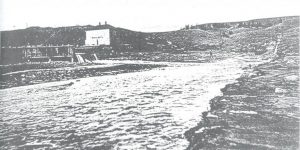 If you came down with a highly infectious disease in the late Nineteenth or early Twentieth century, you were likely to end up quarantined in Mesa County’s Pest House. The Pest House resided in the old Mesa County Hospital building, located just over the Colorado River from Grand Junction on the rise up to the Redlands. The Pest House opened sometime after 1886, when the building was no longer used as a general hospital, and closed before the land around the building began being used as the Poor Farm during the Great Depression. To get to the building from town, patients took Gordon’s Ferry across the river until 1891, took the old Black Bridge from Orchard Mesa into the Redlands until 1912, and then took the Main Street bridge over the river until the construction of the Grand Avenue Bridge.

Health authorities quarantined patients for a variety of conditions that were then common. Interviewees with the Mesa County Oral History Project recount outbreaks of smallpox, diphtheria, and typhoid fever… and of course we cannot forget the Spanish Flu pandemic (which required more than one hospital and location to house the ill). Sometime between 1882 and 1884, the Grand Junction Daily News also reported a nearby cholera outbreak on the Western Slope (please forgive the lack of a citation here, but I am relying on memory since I am “sheltering-in-place” during our own coronavirus pandemic, and therefore lack access to some of the wonderful resources that we have inside our Mesa County Libraries).

Advances in vaccines, coupled with an important campaign to vaccinate the populace that was led by the first City Health Officer Everett Munro, helped eradicate diphtheria and typhoid fever from the county. Improved sanitation also helped to get rid of disease, as Grand Junction stopped taking water directly from the sewage contaminated Gunnison River, and instead took water from the Grand Mesa. The quarantine of ill residents undoubtedly also helped keep infectious diseases from spreading too broadly, and the Pest House, located in a then sparsely populated area, aided in keeping the healthy separate from the infected.

Still, as we covered in a previous blog about the history of disease in the area, not everyone assented to being quarantined or vaccinated. Dr. Munro and others in the fledgling Mesa County Health Department were flummoxed by continued outbreaks of typhoid fever despite a largely successful vaccination program. When a similar outbreak erupted in a neighboring county, they tracked it to a woman who had previously lived in Mesa County. Though she had typhus, she had refused vaccination on prior occasions. They finally “convinced” her to get a shot containing the typhoid vaccine for the good of public health, and the outbreaks stopped.

Stay safe and sheltered-in-place everyone!