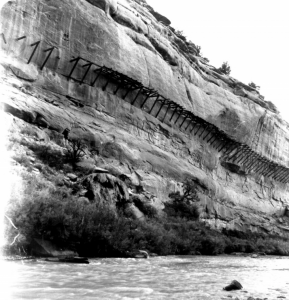 Deep in the Dolores River Canyon, there lies a long-inactive wooden structure built off high hopes and steady dreams of gold.  This engineering feat is called the Hanging Flume, and miles of its fragmented remains cling to the canyon wall above the Dolores River, an hour and half drive from Grand Junction, Colorado.

The hanging flume is a wooden open-water chute designed to aid the transport of water from location to the next, in this case from the river to the Lone Tree Placer Mine located at the mouth of Mesa Creek.  The great gold rush of the mid to late 1800s brought many frenzied miners to the west, and this section of Colorado was no different.  The Montrose Placer Mining Company came to the area and wasted little time in purchasing a mining claim to this specific spot.  The need for more water to the mining site spurred the building of the flume, and it officially began production in 1888.

Some call the once complete ten miles of flume an engineering mystery, and it’s easy to marvel at its appearance and wonder how they actually pulled it off.  Historycolorado.org explains, “Each timber bent is unique, essentially custom-built in order to accommodate the changing geometry of the cliff face. How did the workers in the canyon, possibly suspended in bosun’s chairs, communicate with the blacksmiths on the rim in order to shape the iron for a perfect fit?”

“The lumber was cut off the La Sal Mountains across the river there and Dad had to pass on all that lumber. It had to be knot free…no knots in it. Had to be first class lumber.” – Fred Bowman

It took a huge amount of lumber to be transported for the beams and trestles needed to complete the flume. As stated in “History and Background of the Hanging Flume”, a thorough article by Jack Pfertsh, much of this lumber originally came from Pine Flats, an area in Utah on the edge of the La Sals about 18 miles west of the Dolores River. The lumber cutting location was illegal by Utah regulations, so after the first haul they moved the location 1.5 miles east to Carpenter Ridge, just over the border in Colorado. 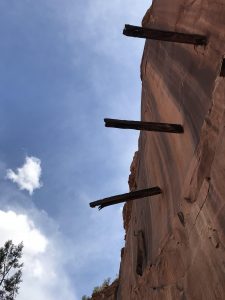 Scarce remains of the flume as seen from below. Photo source: Ike Rackiecki

According to Fred’s recollections, the builders of the flume drilled holes in the sandstone for anchors to hold the wooden channel, built by hoisting down bosun chairs and the men brave enough to sit in them.  Fred remembered Charles telling him that the man who owned the mine and oversaw the Hanging Flume project was named “Capt. Nathaniel P. Turner” who seemed a bit mysterious.  Fred recalled he was an Englishman, and apparently there was a great deal of English money in mining for Colorado gold ore.

Once finished in 1891, the flume worked beautifully, however, the gold yield was not as successful. Turner’s company did not make enough money to pay off the remainder of the claim, and he and his crew of miners were forced to quickly abandon the project.

After nearly one hundred years of no use, the Hanging Flume was placed on the National Register of Historic Places in 1980. A 48-foot section of the flume was renovated and restored in 2012 by the Interpretative Association of Western Colorado and the Bureau of Land Management (BLM) field office of Montrose. You can watch a neat, up-close video of the renovation here.

The length of this engineering wonder makes it the largest historic landmark in the state. I’ve taken the winding, scenic drive from Grand Junction to visit the flume a couple times now, and this striking example of our mining past is always a special scene to behold.