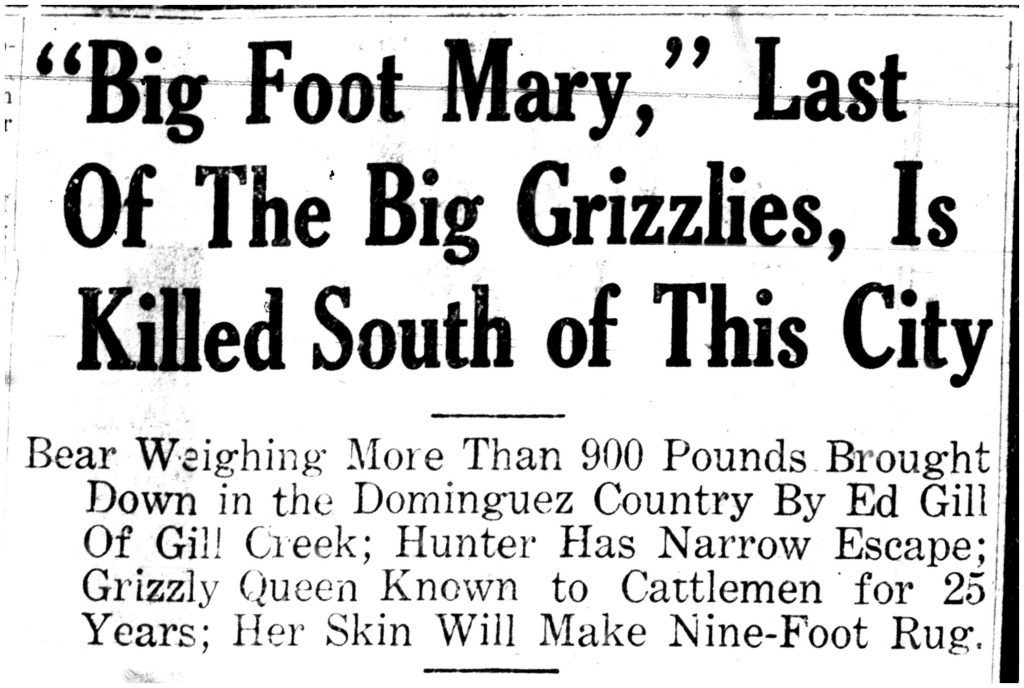 Big Foot Mary was well known among ranchers and inhabitants of the Uncompahgre area for having, well, big feet (interestingly, the leader of the last wolf pack in the Bookcliffs and Roan Plateau was reportedly named Old Bigfoot, so maybe there’s something about big feet, longevity and tenacity). According to a Daily Sentinel article written on October 22, 1925, shortly after Mary’s death, her footprints measured 18 inches, “the biggest track known to trackers of the region.” Upon her death, she weighed 910 pounds, making her bigger than all but one bear that had been shot and killed in the region (a 925 pound bear on Grand Mesa in the 1890’s).

Because of her “predations among cattle on the range,” Uncompahgre cattleman such as T.D. “Shorty” Bowman had pursued Mary for 25 years, to no avail. Mary was apparently wily and always got away. A hunter named Ed Gill of Gill Creek finally tracked her down in the Dominguez area, and related a dramatic story (maybe too dramatic to be believed) to the Sentinel about her death. He said that the hunters “camped on her trail for three days” until finally coming upon the bear:

“But instead of running away, she was charging at me and she was not 10 steps away. I never budged, but shot as fast as I could and she fell with her nose on my boot.”

Upon killing the bear, Gill found that Mary’s teeth were greatly worn, indicating an advanced age that he thought must be greater than 30 years. She was turned into a nine-foot bear skin rug, and her 200 pounds of fat rendered into bear oil.

Less than 100 years ago, both wolves and bears still roamed the wilderness and mesas of Mesa County and the surrounding area. With recent wolf sightings in Colorado, it would not be surprising if wolves lived again on the Roan Plateau and Bookcliffs in the near future. And what does the future hold for the grizzly in Colorado? The last reported grizzly sighting (and death) was near Durango in 1979. People over the years have claimed to see brown bears in the state, but authorities have not confirmed any of those sightings. Could the grizzly bear return?

For more information on Mary, read the article “Big Foot Mary” embedded to the left and below in this blog post. For more information on the last wolves in Mesa County check out the article Eradicating wolves in Colorado was difficult, gruesome endeavor by local historian Bob Silbernagel in the Daily Sentinel, and read the book The Last Stand of the Pack by Arthur Carhart about the eradication of wolves in Colorado by Federal hunters.