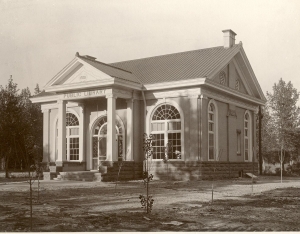 The Grand Junction Public Library in 1901.

Historic Grand Junction was full of different types of clubs and organizations working to make the area a better place to live.  Ethel M. (Bear) Hotchkiss was a member of the Grand Junction Women’s Club in the mid 1900s, and she reflects on the club and its role in the community during her 1979 interview with the Mesa County Oral History Project. (To retain accuracy towards Ethel’s interview I’m referring to it as the Grand Junction Women’s Club, but in research compiled by Donald A. MacKendrick for The Journal of The Western Slope, it seems the group may have actually been called either the Grand Mesa Women’s Club or the Twentieth Century Club.)

Ethel, a huge lover of books, grew up in Loveland, Colorado, and graduated college in 1913.  She moved to Hotchkiss, Colorado to teach second grade, eventually marrying and making her way over to the Grand Junction area. She was a  past president of the Grand Junction Women’s Club (year unknown) and through her membership, Ethel gained access to records and old stories from original members.

One of the first projects of the club (and undeniably one of the most important) was sponsoring the first Grand Junction Public Library.

The original members of the club enjoyed originally meeting as more of a study group, escaping their husbands for a bit and filling their minds with troves of new knowledge. They shared a love of reading and would enjoy giving book reviews, compared and compiled by the club members.  The ladies also had a circulating library from which the members would check out books.

The club shared an outward goal of establishing a free public library that everyone in their thriving new community could enjoy. As stated in the history page of our website,  a subscription library was originally opened to “anyone whose morals were unquestionably good”.  The Grand Junction Women’s Club joined forces with another women’s club in town to form the Library Association.  In 1900 the Library Association contacted the very generous Andrew Carnegie, a wealthy philanthropist, who promised to donate $5,000 for a library building. His offer came with the usual stipulation that funds be secured for on-going support and maintenance. The ladies of the Library Association lobbied the city council with all their might, and a resolution unanimously passed; members of the council pledged $1,200 a year to support the library. The beautiful new library opened July 5, 1901 and was built on the corner of 7th and Grand. The construction of the brick-walled, Colonial-style building cost almost the full $5,000 offered, so Carnegie stepped in again and provided an extra $3,000 for books, desks, chairs, and office supplies.

The Grand Junction Women’s Club went on to sponsor a great deal of other ventures through out the city, including helping to establish the first children’s day care centers. Mesa College (now Colorado Mesa University) found itself receiving a great deal of support from the women during its beginnings in the 1920s. The women hosted dinners and tea parties to draw awareness to the College’s cause, providing greatly needed awareness.

Ethel shared that in 1904, each Grand Junction Women’s Club meeting was closed out with the following words to remind each other of the mindful purpose behind their attendance:

“Keep us from pettiness,

Let us be large in thought and word indeed.

Let us be done with fault-finding,

May we put away all penance,

And meet each other face to face

May we never be hasty with judgement,

And always be generous.

Let us take time for all things.

Let us be calm, serene, gentle.

Teach us to put into action our better impulses,

Granted, we may realize, it is the little things

That in the big things of life

We are as one,

And may we strive to touch and to know

The great common human heart of us all,