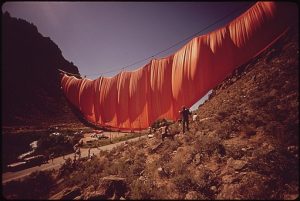 There’s some art that’s not meant to last forever.  If you see it before it’s gone, it leaves a deep-rooted impression on your memory.

Recent European transplants to New York, Bulgarian artist Christo and his wife Jeanne-Claude set their sights on Rifle, Colorado as the next place to create a famous art installation, centered around impermanent beauty.  The Rifle Gap was their canvas – an open space between two mountainous rock faces nearby Rifle Falls State Park. In this open space they aspired to hang a curtain, but not just any curtain: a 365 foot high, 200,200 square foot piece of fabric meant to intertwine the landscape with a brilliant, gigantic swatch of orange.

The couple’s dream of filling the Gap was challenging to breathe into reality.  Many workers had to face perilous, windy conditions while attaching a quarter-mile long cable from each side of the mountain to hang fabric over the highway. Their first attempt in October 1971 was unsuccessful due to wind, and the curtain was ruined and ripped immediately as it unfurled.

Christo was not ready to give up, and immediately started scheming for how to make the curtain-reveal a success during attempt number two. He needed a stronger curtain to withstand the harsh Colorado mountain winds, and such sturdy material irrefutably cost more money.  Christo received a great deal of financial help from European donors, and in return he promised to supply their museums and galleries with his artwork in the future.

The Colorado Highway Department gave the go-ahead for the curtain to be installed across the Gap, but not without a list of conditions: The curtain had to be installed and removed within 45 days of the start date, be built of adequate and specific structural integrity, liability insurance had to be purchased, and a bond guaranteeing its removal had to posted.  The Highway Department also demanded that no advertising of the project be permitted.

In a Mesa County Oral History Project interview, early Grand Junction resident Glenn McFall explained randomly needing to drive to Rifle August 10, 1972, the day the second and final installation was finished.  Glenn visited a friend who told him he should drive under the curtain.  He recalled thinking, “Well that don’t sound like such a bad idea…I’ve got to go out through there anyway.”  At the time, Rifle had a population of 3,000 people, some of which felt they were “too conventional” to understand the point of the curtain.  Glenn himself was perplexed towards its existence, until he drove right through the bottom of the curtain:

“…And we went through, but when I was down here in the Junction thinkin’ about it, I couldn’t figure out why anyone would ever want to do a stunt like that. And I will admit I was a little critical about it, I’ve heard of people wastin’ their money in different ways….And I didn’t think it would look like it did. When I come around the end of that canyon there and looked up there and saw that, that was the most astounding thing I believe I ever witnessed.” – Glenn McFall

As posted on Christo and Jean-Claude’s website (complete with many more fantastic photos of the installation), it took 35 construction workers and 64 temporary helpers consisting of art-school and college students and itinerant art workers to rope down, raise, and secure the curtain.  When Glenn drove back through two days later on the way home from Yampa, Colorado, the curtain was already shredded, fractions of its whole remaining.  It had stayed intact for 28 hours before the wind once again had its way with the fabric.  Glenn remembers pieces of the curtain being sold for $5.00 a piece.

Only an hour from Grand Junction, you can drive through the Rifle Gap yourself to visit Rifle State Park for free when you check out a State Parks Pass from your local library. Reserve the pass on Mesa County Libraries catalog and use it for a week of free entry to any Colorado state park.