It’s the creepy, scary, spooky time of year, so what better way to celebrate than with horror-themed material from Mesa County Libraries (and pounds of candy, let’s not kid ourselves)!

A few horror enthusiasts on our staff compiled some picks that will be sure to ramp up your heart rate and make you wonder what’s out there awaiting you in the dark.

From Hell by Alan Moore and Illustrated by Eddie Campbell

Alan Moore, arguably the best comic book author out there, writes an elaborate retelling of the infamous Jack the Ripper murders.  The plot is intricate and unpredictable as it presents the English royalty, riddled with scandal and controversy, at the head of the conspiracy.  Blackmail, vicious murder, and madness ensue as one by one the Whitechapel women are killed.

Eddie Campbell’s art is dark and ominously matches pitch with Moore’s dramatic storytelling. The graphic novel sends chills down your spine and leave you deeply unsettled.  From Hell is the quintessential Halloween read. 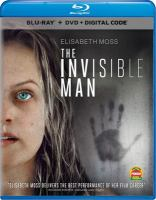 The Invisible Man was more of a thriller in my opinion. It kept me interested and I got a couple jolts from it.  It is truly hard to find a “good” horror flick -There are so many out there that try, but fall flat.

My go-to is Pet Sematary. It is an amazing book; there is also a movie version, but the Stephen King movies never quite make the grade for what one mentally envisions while reading. The plot is a truly interesting concept; who hasn’t wished to talk to or see their loved one that has since passed on? To bring them back from the beyond is so tempting. Check out this classic.

The Haunting of Hill House is a ten-episode TV series that is chilling and haunting. I had to stop watching it a couple of times because it was so scary. I enjoy horror that is supernatural as opposed to slice and dice.

Since it’s recently been given its own show on HBO, there’s never been a better time to enjoy the novel. Lovecraft Country follows eight interconnected stories, all centered around Atticus Turner, a black veteran of the Korean war and Sci-Fi fan. The first story kicks off with Atticus returning to his home in Chicago after receiving a mysterious letter from his estranged father, and takes him through a journey full of monsters, both eldritch and terribly human.

Lovecraft Country pulls no punches in its unflinching depiction of Jim Crow-era racism, and expertly blends the terrors of the time with the xenophobia present in HP Lovecraft’s own work. The dialogue pops with wit and verve, and Matt Ruff’s lively prose brings a believable element to even the most fantastic scenes. A must-read for fans of horror and history alike!

Disgraced former detective Greg Hellinger only wants to escape from the monstrous visions that plague him. But when a young girl named Fiona seeks his help in finding her missing best friend, he’s dragged into an even deeper nightmare. Missing children are a common occurrence on the isle of Merksay, but Fiona claims that her friend Emily’s disappearance is no coincidence; she was abducted by Bonnie Shaw, a mythical bogeyman claimed to lurk the islands.

Mired in a dark world dripping ugliness at every corner, And Then Emily Was Gone is a delightfully creepy little romp, packed with unsettling imagery and human characters far more frightening than any monster. If you’re a fan of bleak fairytales, give this graphic novel a go – and don’t forget to check under the bed.

The Troop by Nick Cutter

I would recommend this book to anyone who has a hankering for vivid descriptions of boy scouts being consumed from within by zombie worms. The worms writhe and squirm just below the surface of the skin of innocent kids who catch a nasty virus on a trip with their scout leader. The Troop by Cutter is a solid dose of terror that will make you squirm like a worm with a perm.

Click on any of the item photos above to be directed to the Mesa County Libraries catalog.  Happy October!