The increase of convenient transportation methods has always been a fascinating part of history.  Roads were trampled out, built, and eventually paved.  The seemingly charming horse and buggy morphed into horsepower engines.  Living in a land where the prominent, fast-flowing Colorado River (called the Grand River until 1921) cut through the land for miles, many original pioneers were forced to cross perilous waters by foot or wagon, praying their horses didn’t slip or get swept away.  The days of adventurous and distressing river crossings ceased with the construction of bridges to help settlers take themselves, their livestock and belongings more safely across the mighty river.

In Mesa County, the town of Palisade went through a number of bridges, the first such structure coming into fruition in February of 1896. The building of the bridge began over what was called the “Narrows Section” of the Grand River, a bit east of the town of Palisade. This footbridge and strengthened ferry cable was intended to help lessen danger for crossing settlers and save time for fruit growers trying to bring across their produce to sell. Denver engineer J.F. Williamson was the supervisor of this bridge project. The building of the bridge was nearly halted the week of May 12, 1896 as the river raised three and half feet in a few days, threatening to deter the placing of wooden support beams. The builders continued on, some said rather slowly, and the bridge was finally completed in August of that year. 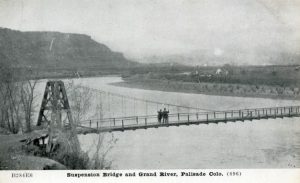 Fast forward to 1909. The water levels are growing higher, the population increasing, and the footbridge is now seen as a lackluster commodity that could be reformed and improved to allow wagon travel.  The county commissioners ordered the old bridge to be torn down, and a new steel bridge built in its wake. In February of that year, the M.J. Patterson Bridge Company of Denver was awarded the task for $9,900. The bridge was to be built directly beneath the old foot bridge, and the cost was assisted by the community of Vineland whose citizens contributed $5,000. Just as the Interurban streetcar helped many fruit growing settlers transport their harvests across the valley with more ease, this bridge made it possible to safely pass large quantities of precious fruit across the river. It was fully constructed and ready for travel in June of 1909.  According to the book “Peaches and Politics in Palisade, Colorado” by Paul H. Bardell Jr., this steel bridge was taken out of use in 1950.

To keep up with the times and the traffic during busy fruit harvests, yet another new bridge in that same location was built connecting Vineland to Palisade in 1937.  This bridge was the widest and sturdiest yet, allowing two cars to be on it at once…in different lanes! The building process seemed to go smoothly until June of that year, when a steel beam crushed a man to death during a harrowing accident. Despite the tragedy, the bridge was completed and ready for automobile traffic in August.  The first man to cross this new edition was one of the area’s early pioneers, John D. Reeder.  He and his fellow bridge appreciators christened the bridge by drinking some fresh cool Colorado River water; in their words, “Why break a bottle of champagne?”

For more information on the developments of early life here in the Grand Valley, be sure to visit the Mesa County Oral History Project.