Like many other adventure stories throughout the ages, Rime (stylized as RiME) begins with our main character being washed ashore on a mysterious island. All we know is that there has been a storm out on the ocean and the unnamed boy is left to explore on his own. The player directs the boy in his adventure as he jumps, climbs, rolls and makes noise (yelling, singing or humming) to interact with the environment. 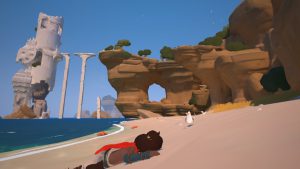 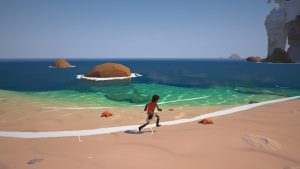 Soon our adventurer is being guided by a small fox which leads him down paths further into the island and into a large white tower standing in the center. There are puzzles to solve at every stage, using camera perspective, problem solving, even light and sound to push forward. We also start to see a figure in a red clock who is watching the boy from a distance and who always disappears just around the next corner when we approach. 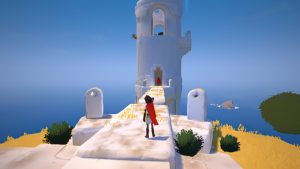 Rime is foremost a puzzle game. It puts me in mind of Legend of Zelda: Windwaker if someone had just strung together the puzzles and removed all the enemies. This is also because the art direction is somewhat similar for both games. Rime went for a colorful, artful cartoon style that really adds to the dreamlike quality of the play. It gives you the feeling that this isn’t quite reality but it’s certainly a reflection of it. I love the ambient noise and music in this world as well since there are no spoken words (besides our boy yelling) which makes for very unique storytelling. 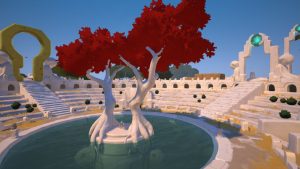 My only two issues with this game is the lack of open world and the inability to return back to some parts of the island. Rime was very close to being open world movement wise but was trimmed down in order to make the game more manageable to design. Which makes sense but I hate trying to figure out which rocks I can climb and which rocks I can’t, what paths I can take vs. which have an invisible wall etc. I also didn’t realize that once I left certain parts of the island I couldn’t return! I might be able to later in my playthrough but so far no luck. With that in mind, I still highly recommend this game for it’s thoughtful play without the usual stress of enemies, time limits or health bars.

Rime has a ESRB rating of E for Everyone Ages 10+

Rime is available through the library on: 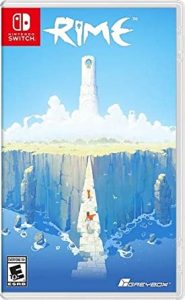 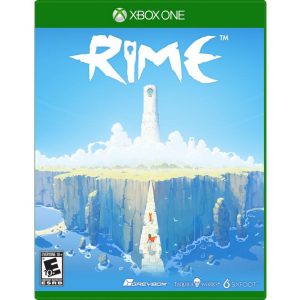