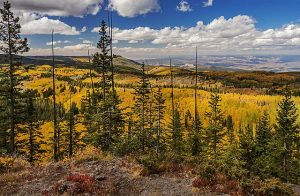 Anyone who lives in Mesa county and loves the crisp autumn air and the bright yellow Aspen trees knows one of the best spots to get your fill of beauty is on the Grand Mesa.  The Grand Mesa is the world’s largest flat-top mountain, located 40 miles east of Grand Junction, Colorado. Every year the Mesa puts on one of the best leaf peeping shows in the state, perfect for picture-taking, picnicking, or cruising around with the windows down to enjoy the rich, seasonal hues.

Just as we walk around today to take in the autumnal beauty on the Mesa, the early settlers of Mesa County enjoyed walkabouts in the same stunning places. The mountain holds many stories from our county’s history; the following places are the backdrops for these stories.

Today, Leon Peak is an admirable hiking feat atop the Grand Mesa. At six miles round trip from the trailhead, the peak stands at 11,236 feet, making it the highest point in Mesa County.

The Forest Service created a fire lookout on Leon Peak in 1911. They considered the angle from this peak as being one of the best for all around views, and planned to station a lookout there permanently during wildfire season to become “equipped with strong glasses, telephone connections, and every appliance necessary to keep watch of the forest.”

The lookout station was built by Ranger Clay Withersteen and has held its old foundational structure quite strongly throughout the years, still standing today. The lookout station was only truly utilized for a few years after its establishment until 1915; the lightning danger atop the peak was said to be too great to risk human life. While occupied in 1913, brave folks such as Ben Suchre camped at the base of the peak only to climb up each day to sit watch.  At one point, Ben’s mother came and camped out with him, climbing up the peak each day to be rewarded by the magnificent panoramic views. That summer at least 50 people were said to have visited Ben during his lookout shifts.

The peak has also been used by some to study the snowpack in hopes of estimating the river runoff for the year to come. A Delta Independent article in February of 1903 stated that the snowpack atop Leon Peak was at a whopping twelve feet in 1901.

The old lookout tower makes for a nostalgic visual treat if you decide to take the steep hike.

The Wild Rose Trail on the Grand Mesa was built by the famous explorer himself, the one and only John Otto, original custodian and advocate for the Colorado National Monument. As detailed in the book “John Otto: Trials and Trails” by Alan J. Kania, the Wild Rose Trail was completed in August of 1920 by Grand Mesa National Forrest supervisor Ray Peck, John, and his burros as a forerunner to Land’s End Road. John loved the area, calling the Mesa, “The finest made mountain in America.”

Local Chamber of Commerce officials scouting the area before the production of Land’s End Road in 1933 wanted to see Otto’s handiwork, so they ventured out to take a hike on his in-progress trail. The rocky paths and sharp switchbacks left the men feeling breathless, and only true daredevils of the group would stand on the edge of the large rocks lining the trail to see further than before.

The trail was a hit with the hiking party in the early 1900s, and its location continues to be a popular trail system for hikers of today; you can still visit the area by starting at the Wild Rose picnic area on the west side of the Mesa. 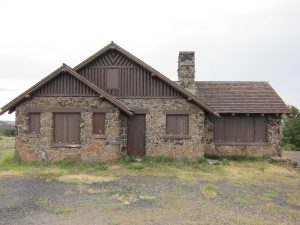 Another Grand Mesa spot featuring incredible views is Land’s End Observatory.  Completed in 1937 by the Civilian Conservation Corps and the Works Progress Association, the rustic lookout was originally used as a ranger station. Mesa County Oral History Project interviewee Elbert Odell “Digger” Miracle worked on the crew that helped build the Observatory, where he remembered making around $40 a month.  Miracle was also part of the crew involved in a tragic 1932 accident – while building Rim Rock Road on the Colorado National Monument, nine of his fellow crew members were killed while attempting to dynamite blast a tunnel. You can listed to his account of the tragedy here.

In the 1940s and 1950s, the Land’s End Observatory housed the first ever Grand Mesa Visitor’s Center where travelers could stop to buy a sandwich, take in the views, and use a primitive telephone if needed. Although no longer in official use, it is still utilized today as a stopping point for the views, perhaps before (or after) making the scenic drive on Land’s End Road.  It also holds a place on the National Register of Historic Places.

Check out these spots and more on the beautiful Grand Mesa, and get your fix of local history from the Mesa County Oral History Project.