For some, winter becomes a time to celebrate quiet solitude and reflection. For early Westwater Canyon homesteader, Veda Macbeth, solitude existed no matter the season.

Veda was born in 1899 and spent the first decade of her childhood living in La Sal county, Utah.  She moved to Mack, Colorado in 1919 where she began work in the Mack Store as a salesperson.  Veda and her father also owned the store and lived behind the building, immersing them deeply into the early culture of Mesa County.  The family business received supplies from the Rio Grande Railroad traveling between Mack and Grand Junction, and she met many interesting travelers stopping through along the way. In 1921, Veda married Raymond McBeth and left her work at the Mack Store to move 40 miles over rough terrain to Westwater Canyon, beginning her new life as a married homesteader. 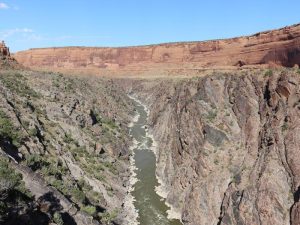 Westwater Canyon is located right next door to Mesa County on the Colorado River, starting on the Utah/Colorado state line and extending to Cisco, Utah. During warmer months of the present, you can’t enter the canyon without bearing witness to jubilant rafting activity, as the river holds excellent whitewater rapids and rare, black Precambrian rock formations.  During Veda’s time living in the canyon, boaters went down the river but usually only to fish for their dinner, hide out, or scout any potentially promising mining spots.

According to her obituary in the Daily Sentinel, Veda and Raymond helped run the Westwater Ranch, primarily for stock-raising, from 1921 to 1936. They weren’t entirely alone – A few other families lived in the canyon around the Westwater townsite, but to Veda the silence of the area seemed inescapable. She had no telephone, no radio, and very little contact with those outside the canyon. Working on the ranch seemed to keep the couple busy enough; in 1924, they added two large cisterns to help support themselves and any ranchers coming through with sheep and cattle.

For enjoyment, the couple would take the long journey to Grand Junction or visit the Westwater school nearby, which was built sometime in the late 1920s as more families with children moved into the canyon. The school provided one of the only forms of entertainment in the area: every so often, a local judge would show a silent movie by posting a projection screen on the side of the building.  The schoolhouse was torn down long ago, and only a few remnants of the Westwater townsite structures still exist today.

Veda remembered her years living in the canyon as some of the quietest moments of her long life.

The beautiful area of Westwater remains an interesting part of the Western Slope and carries an extensive history of mining, outlaws, and cattle ranching. For more detailed information on the compelling history of the area, I encourage you to check out Westwater Lost and Found by Mike Milligan, available in our catalog. Also take some time to listen to more original interviews with early Mesa County settlers like Veda McBeth, accessible online within the Mesa County Oral History Project.