“The mission of Handy Chapel has been and continues to be a beacon of helping with the spiritual, social and economic needs of all our fellow man.” – Josephine Dickey

Nestled on the corner of 2nd Street and Grand Avenue in Grand Junction, Colorado lies the Handy Chapel, an important structural piece of Mesa County’s history. The Black citizens of early Mesa County were deeded a lot to start their own church of any denomination in 1883, and in 1892, nearly a decade and $962.50 later, the Handy Chapel was constructed.  It served as the area’s first church for the Black population, and is now the only original church building still standing on its initial plot of land in Mesa County.

Until her death in 2016, Josephine Dickey was a longtime Mesa County resident and one of the most recent caretakers of the 127 year old church. Josephine was born in the area, and her great grandfather William Austin was one of the original founders and builders of the chapel. 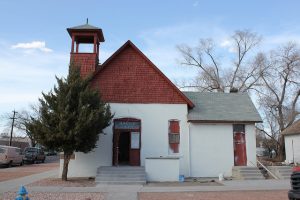 Community effort was important during the lifespan of the church. “A few years back, different churches helped us organize a Library Day.  A lot of books, especially hymnal books and things like that, were discarded because they were thought of low value at that time, and other churches would give theirs to us. We still have quite a few of the books, and that was a ‘library of the church’ for a long time.” Josephine said in a 1977 interview with the Mesa County Oral History Project. Family and friends of Josephine’s provided invaluable assistance with keeping the building well-maintained and cared for throughout its existence.

The Handy Chapel was not solely built to serve as a spiritual meeting space. In the 1920’s a side building called the Chapel House was constructed to house the homeless and people in need.  The church did not discriminate against anyone desiring shelter and a safe place to sleep for the night; people of all races and socioeconomic status were welcome.

“The parsonage was built adjacent with the church, then we have two other individual buildings that we rented out to the poor, or to the Blacks,” Josephine stated. “Years ago it was almost impossible for a Black person to get into a motel or a hotel. So anyone that came through here that was down on their luck they would rent, or could use these places until they had a job or moved on or whatever…It was in my family upbringing to help people.”

The chapel was placed on the National Register of Historic Places in 1994, and with the help of grants, preservationists, and volunteers, Colorado Preservation, Inc. was able to save the building from demise in 2012.  The preservation project included replacing the old roof and making the structure more energy efficient.  The Chapel is currently closed, but hopefully the buildings will stand for decades to come as an important cultural and historic landmark.