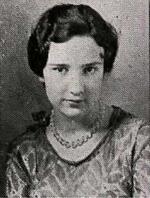 In the Denver Museum of Nature and Science Annals, Dr. Hannah Marie Wormington is described as, “Precocious. Audacious. Gifted. Prolific. Ambitious. Connected. Cavalier. Regal. Fiery. Intelligent. Generous. Opinionated.” She was a woman who studied and worked hard to stand out and have her voice heard in a profession full of men, and in the realm of discovery her hard work paid off.

Hannah Marie was an anthropologist, a writer of published texts, an educator, an explorer, and an archaeologist. She was born in Denver, Colorado in 1914, and graduated from the University of Denver in 1935 with a bachelors in anthropology.   In 1954 she became the second woman to graduate with a PhD of anthropology from Harvard University.

She was involved in overseeing a plethora of field research sites and excavations around Colorado and Utah, and several of these explorations were actually within Mesa County.  In 1938 near Grand Junction, she examined Basketmaker cultural sites.  That same year, also not far from Grand Junction, Hannah Marie worked on the Turner-Look Site located 13 miles north of Cisco, Utah in Cottonwood Canyon. She discovered a sweat lodge, artifacts, and special remains of pottery, all decidedly from the Fremont Culture. One of the more astounding finds on this dig was when she discovered two skeletons, intertwined – a male, holding a baby.

She returned to the area several times in the following decades to work on digs, one of which occurred in 1951 when she directed the excavation of the Taylor and Alva rock shelters in Mesa County.

The Taylor and Alva sites were named after the rancher who owned the land, Alva Taylor. The Taylor site lies miles up Unaweep canyon from the intersection of State Highway 141 and U.S. Highway 50. In the Taylor Site, they found six hearths, a cache of artifacts, flaked stone tools, and projectile points such as small knives, and animal bone tools.  The Alva site is only two miles southwest of the Taylor location, and Hannah Marie was able to find grinding implements, milling stones, and knives.  All the artifacts from the Alva site matched the Taylor site discoveries in production, size, and apparent usage, leading the diggers to believe that both sites were part of the same living complex.

Hannah Marie was the author of seven popular archaeology texts that are still used in universities today.  The Archaeological Investigation on the Uncompahgre Plateau, and Ancient Man in North America are two titles carried in Mesa County Libraries Rashleigh History Room.  As explained in an abstract written by Steven E. Nash, both books are penned under the name “H.M. Wormington” instead of “Hannah Marie”. Sadly, many women in science faced discrimination and Hannah realized she would need to keep her gender anonymous to receive the credit she deserved.

Hannah Marie was also a confidant and friend of early local Mesa County resident, self-taught archaeology enthusiast Al Look, who was heavily involved in archaeology within the area.  In a 1981 lecture series hosted by the Museums of the West, Hannah Marie was a featured guest speaker and detailed her admiration towards Look:

“…There are, however, other individuals that provide invaluable aid in discovering, preserving, and interpreting an irreplaceable part of the human record.  They seek knowledge, not simply specimens to be doted over. Only the latter deserve to be called amateur archaeologists, a title that given its true connotation should be a source of pride.  The word “amateur” is derived from the Latin “amator” – to love, and these are individuals who have, and who demonstrate, a genuine love of archaeology.  Notable amongst those individuals is Al Look, the individual we are honoring tonight.” – Hannah Marie Wormington

You can listen to her speech from the lecture series here, as featured on the Mesa County Oral History Project.

Later in life, Hannah Marie traveled the world to study anthropology, and she continued sharing her expertise while teaching at universities throughout North America.  The end of this impactful woman’s life was tragic; in 1994 she passed from smoke inhalation due to falling asleep holding a cigarette in her Denver home. Her significance within the archaeology and anthropology world was undoubtedly momentous, and worthy of being celebrated.