As winter settles into the Grand Valley, a mechanical crew works to install piping for plumbing and electrical components in preparation for the main foundation slab to be poured at the new Mesa County Libraries Clifton Branch. (Photo by Jennifer Deering)

If you haven’t driven by the site of the new Mesa County Libraries Clifton Branch near the intersection of D½ and 32½ roads recently, here’s an update of what’s been going on since we broke ground at the end of August:

The new Clifton Branch is expected to open in August 2023.

For more information about how you can support the new Clifton Branch with a year-end gift, visit the project webpage or call 970-683-2438. 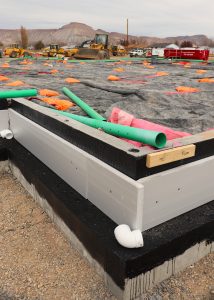 Piping segments await installation as tarps and sandbags protect newly installed rebar from looming winter weather while crews prepare the site of the new Clifton Branch Library for the eventual pouring of the main foundation slab. (Photo by Jennifer Deering)