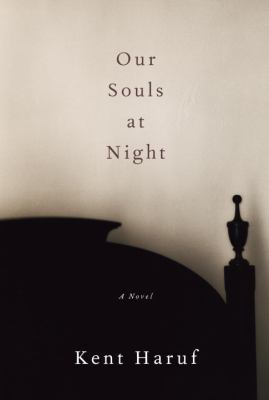 In this last novel before his death in 2014, acclaimed novelist Haruf (Benediction) captures small-town life to perfection in his signature spare style. Addie Moore and Louis Waters have been neighbors in the eastern Colorado farming town of Holt for over 40 years. Now, alone except for their grown children, Addie has asked Louis to visit her every evening, to stay with her in bed, just to get through the lonely nights. Louis is not a risk taker, but he’s lonely too, and so begins their companionable routine, talking about not only trivial matters, but also about the past, his affair with a local teacher, her daughter’s death at age 11.

Her bullying son Gene interferes. After leaving his son Jamie with Addie for the summer, during which time the troubled boy improves markedly in behavior, Gene sees what is going on and issues an ultimatum. She can not see Jamie unless she stops seeing Louis. As much as she loves Louis, she cannot live without Jamie. As she wrestles with her decision, an accident forces her to move near Gene in western Colorado. In the solitude of her room, she finds a way to resume their nightly talks. Haruf gives a delicate touch to Addie and Louis, their enjoyment of simple pleasures, their disappointments and compromises. This poignant eloquent novel resonates beyond the pages. Do not miss this exceptional work from a literary voice now stilled.