With more holiday feasts on the horizon, it’s no wonder that most people think of “pigging out” as an act of mass consumption. When I talk about pigging out, though, I mean something somewhat different – thanks to Patrick who is 9 and loves pigs, I’ve been consuming (reading) lots of books featuring pigs. I’m pretty sure if he had just one wish, he would wish for a pig (if not to be one). 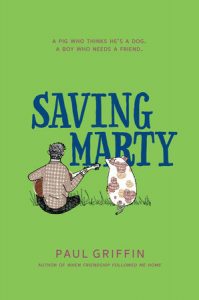 Before Patrick, if asked for a book about a pig, the only one that would have popped into my head would have been Charlotte’s Web by E. B. White. Because of Patrick’s passion for pigs, though, I have been reading all sorts of books with prominent pigs. The most memorable one, like Charlotte’s Web, is a sensitive and emotionally moving middle grade novel. Saving Marty by Paul Griffin is about Lorenzo, a man-sized eleven-year old, whose father died in the war. He lives on a farm in Pennsylvania with his hard working and financially stressed mother and grandfather. His best friend is an amazing musician named Paloma who is like a sister to him. When his mother sells off their pig and her piglets, the runt is left behind and their dog adopts him into her litter of puppies.

In memory of his father, Lorenzo names the pig Marty, and he and Marty quickly become constant companions. However, as Marty grows, so does the cost of caring for him. With money in short supply, Lorenzo knows he must do something to keep Marty from being sent to market. Perhaps his last hope for keeping Marty, Lorenzo enters him into an agility competition for dogs. Marty will have to harness his own piggy strengths if he is to beat the dogs at their own game. A 350 pound pet pig presents many, seemingly unsurmountable problems, and tears may flow when Lorenzo discovers a long buried secret.

Pigs are popular in picture book series. There is Peppa, Pug and Pig, Elephant and Piggy, and the Pig in a Wig books. There are also many stand-alone books like my new favorite picture book, the very silly but fun, I Love You Like a Pig by Mac Barnett, illustrated by Greg Pizzoli, and Rufus Blasts Off! by Kim Griswell, illustrated by Valeri Gorbachev.