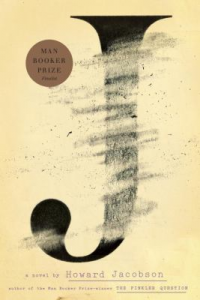 Some recent new books are fascinating for the brevity of their one-letter titles.

F, a novel by Daniel Kehlmann, published August 2014, was reviewed by James Wood in the New Yorker. He writes that F can seem a conventional tale of family woes, shaped around the life stories of the three failed Friedland brothers, Ivan, Eric, and Martin. Each, in different ways, is a fake or a fraud (one of the things “F” stands for in the book, along with “faith,” “family,” and “Friedland”).

J., written by Man Booker Prize-winner Howard Jacobson and published October 2014, is also a philosophical work of fiction set in an Orwellian world where collective memory has vanished and the past is dangerous territory.

S. by J. J. Abrams, published October 2013, has a plot slightly reminiscent of an activity for the library’s 2009 One Book event for Extremely Loud & Incredibly Close. We engaged in Book Crossing, the practice of leaving a book in a public place to be picked up and read by others, who then do likewise. In Abrams’ book, a young woman picks up a book left behind by a stranger. She finds the book full of margin notes, and responds with notes of her own, leaving the book behind for the same stranger to find. The result is an unlikely conversation.

Even though it is highly unusual to use just one letter of the alphabet for a title, it is not without precedent. There are numerous examples from A-Z. In 1968, Andy Warhol’s book was simply a. John Updike titled his 1988 novel S. Thomas Pynchon wrote V. in 1963.

Still, one wonders why an author would write a book, get to the end, and then pick the title from one letter of the alphabet, especially when single-letter titles are not Internet friendly. I’m still looking for a book with the numeral 1 as the title–I didn’t write down the author’s name.